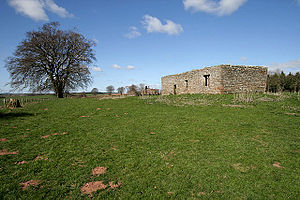 Bassendean is the site of a vanished village of Berwickshire, of which little remains today apart from its Georgian manor house. The site of the village is two and a half miles south of Westruther and two miles north-west of Gordon. It lies by the Eden Water, immediately south of the extant hamlet of Houndslow.

Bassendean was a mediæval village but it declined in the 17th century, and now only a ruined church now remains of it.[1] The church, dedicated to St Mary, was established in the 12th century. Disused after the Reformation, it was rebuilt in 1647, but was replaced only two years later by a new church at Westruther. It subsequently became the burial ground for the Homes of Bassendean.[2]

Bassendean House has been the seat of the Homes of Bassendean since 1583. Only a fragment of the original tower house remains, although the 17th-century house is still in domestic occupation.[3] The house and the ruins of the church are both protected as Category B listed buildings.[4][5]

During the 1830s, the Colonial Secretary of Western Australia, Peter Broun, who had ancestral ties to Berwickshire, gave the name Bassendean to his homestead near Perth in Western Australia. By the 1920s, the surrounding suburb had also become known 'Bassendean' and was officially so named.