Barton-upon-Irwell (also known as Barton-on-Irwell or Barton) is a suburban area of Eccles in Lancashire. Barton lies about 5½ miles west of Manchester.

Barton Old Hall, a brick-built house degraded to a farmhouse, was the seat of the Barton, Booth and Leigh families. The church of St Catherine, built in stone with an octagonal spire rising to 100 ft, was consecrated in 1843.[1] The church was demolished in the 1970s due to dry rot and the parish was merged with the neighbouring church of St Michael & All Angels, Peel Green.[2]

The Lords of the Manor; the de Traffords were Roman Catholics and the Grade I listed All Saints' Church was built at their expense between 1865 and 1868 by Edward Welby Pugin. It ceased to be a parish church in 1961 and was taken over by the Friars Minor Conventual. Land for its graveyard given by the de Traffords is on the far side of the ship canal.[3]

The de Traffords believed in religious freedom and paid for churches and chapels of other denominations. Between 1865 and 1868, the Church of England St Catherine's Church was built at their expense to the rear of All Saints' Church. It was demolished in the late 1970s. The graveyard remains and is the last resting place of Marshall Stevens.[4]

Barton-upon-Irwell Methodist Chapel, built in 1796, was a short distance from the bridge. The buildings were taken over in 1973 by the Church of the Nazarene, but were later abandoned and demolished in 2001 for housing, causing controversy over the treatment of the graveyard by the developers.[5]

Barton is on the north bank of the Manchester Ship Canal and the River Irwell. A pair of ship locks is on the western edge of the district. It is also home to Barton Swing Aqueduct, which carries the Bridgewater Canal over the Manchester Ship Canal. From the late 19th century, the road from Barton to Stretford was carried over the canal by a low-level swing bridge, the opening of which for shipping to pass caused lengthy traffic delays to vehicles.

Before the Manchester Ship Canal was built, the Bridgewater Canal crossed the Irwell by a stone aqueduct of three arches, which was the first constructed in England over a navigable river.[1]

The Liverpool and Manchester Railway, opened in 1830, passes through the township.[1] Barton Aerodrome was opened on 1 January 1930 and was the first permanent municipal airfield in the United Kingdom. Scheduled internal passenger flights operated in 1930 and again from 1934 to 1938, when the services were transferred to the new larger Ringway Airport (now Manchester Airport). Several charter airlines and flying clubs were based at the airport prewar.

During the Second World War over 700 aircraft were built here by F. Hills & Son and over 1,000 military aircraft were repaired by several firms. In 1946, the Lancashire Aero Club, founded in 1924 and the oldest flying club in the UK, moved here from Woodford Aerodrome, Cheshire. Barton is now a thriving general aviation airfield owned by Peel Holdings and is the base for over 150 private and club aircraft. 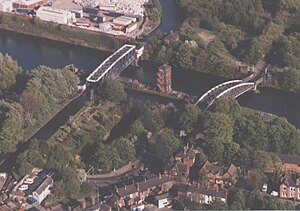 The SW portion of Barton showing the Bridgewater Aqueduct (left) and the road swing-bridge (right) crossing the Ship Canal, with adjacent housing

Featured in the last scene of the 1961 film A Taste of Honey, the Barton Aqueduct and Swing Bridge are seen as the character of Tom sails away. In the film's opening scenes of street life in Salford, two young children are seen playing. One of them, the 5-year-old Hazel Blears, grew up to become the Member of Parliament for Salford and a Cabinet Minister.[6]