Bacton is a village and parish in the Tunstead Hundred of Norfolk. It lies on the coast, some 12 miles south-east of Cromer, 25 miles north-west of Great Yarmouth and 18 miles north of Norwich. Besides the village of Bacton, the parish includes the nearby settlements of Bacton Green, Broomholm, Keswick and Pollard Street.[1] It also includes Edingthorpe, which was added to Bacton civil parish in 1935.

The seaside village is located on the North Norfolk coast between Mundesley (a blue-flag beach) and Walcott. Bacton is known for its very quiet sandy beaches offering miles of walking along the beach and cliffs. The England Coast Path passes through the village and also the Paston Way long distance footpath linking Cromer and North Walsham. 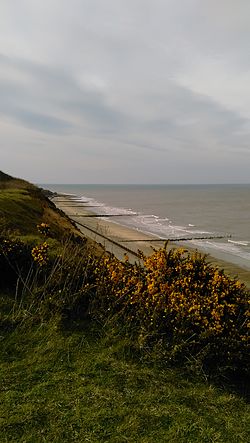 In the east of the parish can be found the ruined Cluniac Bromholm Priory.[2]

Amenities in the village include a public house, a hotel, two cafes, one restaurant and takeaway food establishments as well as a recreation ground. In addition there are several caravan parks and estates consisting of privately owned holiday chalets, giving holidaymakers access to the beach. During the First World War there was also an airfield located nearby, RAF Bacton.

The village and adjoining coastline has extensive sea defences, erected to prevent coastal erosion. Part of this sea wall in nearby Walcott was damaged in the storm surge in December 2013, which caused damage to several caravans and chalets.

North of Bacton lies the village of Paston where the Bacton Gas Terminal is located.

This Norfolk article is a stub: help to improve Wikishire by building it up.
Retrieved from "https://wikishire.co.uk/w/index.php?title=Bacton,_Norfolk&oldid=64364"
Categories: