Baconsthorpe Castle is a fortified manor house, now a ruin, to the north of the village of Baconsthorpe in Norfolk. It has been designated as a Grade I listed building,[1] and is a Scheduled Ancient Monument.[2]

The Heydons were an ambitious family. They first made their fortunes through the law and subsequently from wool. John Heydon (died 1479) rose to prominence and influence as a supporter and ally of the 1st Duke of Suffolk, William de la Pole.[3] During the turbulent Wars of the Roses (1455–1485) John often switched his political allegiance to serve his own purposes. Although he managed to amass great wealth, he also made many enemies, and was described by contemporaries as crafty and quarrelsome.[4] His position meant he needed a secure base from which to operate.

This castle was built from around 1460 to 1486 by John Heydon and Sir Henry Heydon (died 1504).[5] It was built without a licence to fortify and initially consisted of a quadrilateral manor house which was later fortified. It became increasingly large and more elaborate as the family's wealth grew. The east side contained a lake, the other three were protected by a deep ditch.

A three-storied gatehouse was built in the middle of the south wall. It was an important symbol of John Heydon's Lordship.[3] This gatehouse was also large enough to serve as a self-contained defensible residence in times of danger. The gatehouse had two lodges on the ground floor, one of which housed a porter, the other the chief servant. There was a spacious suite of chambers for Heydon family on the first floor. There is a description of these rooms in the will of John Heydon's son, Sir Henry Heydon. They are described as being luxuriously furnished with feather beds and silk curtains. The small room directly above the porch was thought to be a private chapel. 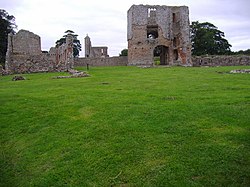 View across the quadrangle from the northeast corner

The quadrangle was completed with walls, towers and a range of buildings. A service range of buildings stood on the eastern side of the quadrangle. These buildings were converted in the Tudor period by Sir John Heyden II into a wool processing factory. The large windows in this building provided plenty of light for the spinners and weavers that worked there. Much of the cloth produced at Baconsthorpe was sold to the Netherlands. The coarse material was softened by the process of "Fulling". This involved the pounding of the cloth by foot in soapy water or stale urine. It is thought that this process was carried out in the tower that stands on the northeast corner of the quadrangle

A drawbridge crossed the moat and 50 yards to the south an outer gatehouse was built.[6] The outer gatehouse was a later addition to the moated residence beyond and was built to display the family's status and wealth.[7] It formed an impressive entrance to the Heydon's property as part of the outer court. The court was flanked on the east side by a row of cottages. On the west flank was a long barn parts of which are still in use today by the local farmer.

The house was subject to a dispute in the 16th century when its owner, Sir William Heydon (1540–1594) fell into debt and mortgaged it. He decided to sell part of his property in 1590 but was challenged by his son, Sir Christopher Heydon (1561–1623). Sir William then threatened to demolish the house, but Sir Christopher secured a prohibition order from the Privy Council and the house was spared.[8]

The house fell into ruin after the Civil War.[1]

The ruins are administered by English Heritage and are freely accessible to the public.[9]