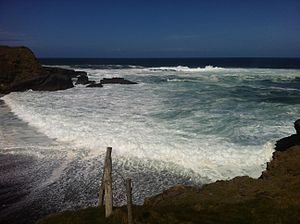 Aughris is a townland in County Sligo, on the Atlantic coast. Its name is from the Irish Eachrois, meaning 'promontory of the horses'. The townland occupies the extreme point of the headland, which also incorporates to the townlands of Cartronofarry West, Corkagh More, Garryduff, Kilrusheighter and Rathglass. The area has been settled since at least mediæval times and there are numerous archaeological remains in the vicinity.

Aughris now has a small harbour used by inshore fishermen and a popular public house known as Maggie May's Beach Bar. The geology of the area is limestone, with numerous fossilised coral fauna visible in exposed coastal areas.

A tiny clachán-type village located close to the coast is now largely abandoned. Most existing houses cluster near the harbour and public house.