Aston Ingham is a village in south-eastern Herefordshire, near Newent and about seven miles east of Ross-on-Wye. The recorded population of at the 2011 census was 398.

The parish church here is dedicated to St John the Baptist.[1] It is a Grade II* listed building.[2]

The village is called Estune in the Domesday Book of 1086, from the Old English east tun, meaning "eastern farmstead or estate". In 1242, it was Estun Ingan for the Ingan family who had a manor there at the time.[3]

The Domesday Book records that Aston had 23 households. There was one lord's plough team, eight men's plough teams, and one mill. In 1066, the lord was the King and 20 years later the lord of the village was Godfrey,[4] who was also lord of Cleeve and Lower Cleeve and Wilton and Ashe [Ingen] in Archenfield Hundred.[5] Ansfrid of Cormeilles was the tenant-in-chief.[4] For about one hundred years, the land was attached to the barony of Cormeiles. The land was then sold to the Ingayn (or Ingan) family, who added their name to the village name.[6]

In 1868, Aston Ingham was defined as a village, parish, and township on the border of the Forest of Dean. It was located two miles from Mitcheldean Road railway station of the Hereford, Ross and Gloucester Railway and 13 miles from Gloucester.[7] It had an old white stone church in the Diocese of Hereford. Its pastor was Rev. Henry L. Whatley. May Hill between Aston Ingham and Longhope, with its distinctive clump of fir trees, was said to be a reference point for mariners in the Bristol Channel.[7][8][9] There was a National free school for boys and girls.[7][8] The lord of the manor was Captain K. M. Power. In 1861 there were 2,378 acres of land in the village and a population of 568.[8] There were also lime kilns and coal pits in the area.[10] 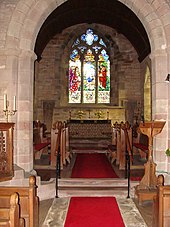 The parish church of St John the Baptist was first built in the 13th century. The current rock-faced, sandstone church has a chancel arch from that period and the blocked chamfered pointed doorway may also be from that century. The tower, on the west side of the church and built within the nave, is from the 16th century. In 1891, the church was rebuilt, retaining some of its historic features, by Nicholson and Son.[11] Including the nave and tower are a west porch and lower chancel. The windows of the church include a lancet window near the gabled porch, three trefoiled lights for the west window, ogee lights, chancel windows with 20th-century glass, and a south nave window with glass from 1890. Within the church, the lead-lined font is from 1689.[2]