Ashwell is a village in Hertfordshire about four miles north of Baldock and close to the boundary with Cambridgeshire.

The village has a wealth of architecture spanning several centuries. The parish church dates almost entirely from the 14th century and is renowned for its ornate church tower which stands at 176 feet, and is crowned by an octagonal lantern with a leaded 'Hertfordshire spike'. The church also contains some mediæval graffiti carved on its walls which highlights the plight of survivors of the bubonic plague pandemic known as the Black Death. There was also a great fire of Ashwell which fortunately killed nobody.

The village itself is mostly in a fine state of preservation, from the mediæval cottage to the fine town house, plastered or timbered, thatched or tiled, in Tudor, Stuart or Georgian brick. Listed buildings include the St. John's Guildhall of 1681, and the carefully restored Foresters Cottages, Chantry House with its 15th-century window, the 16th-century town house (now a local museum), the Maltings (now converted into flats), and a small brick house which was first built in 1681 as a school by the Merchant Taylors. Ashwell Bury, a large Victorian house, was remodelled by Edwin Lutyens in the 1920s.

Ashwell also has a village lock-up that was used to detain drunks and suspected criminals. It has been out of use for a while.

The village used to be home to a number of local breweries and, accordingly, a variety of public houses in its past, but currently has just three pubs: The Rose and Crown, the Three Tuns and the Bushel and Strike.

Ashwell also has several successful sports teams from under-12s to veterans. The adult first football team have won several trophies and are currently in the Hall's of Cambridge Sunday league premier division. The cricket team won the Cambridgeshire Junior Cup in 2003 and currently play in Division 1 of the Cambridgeshire league. There are many other clubs and societies catering for all interests.

An attractive natural feature are 'The Springs', a perennial source of the River Cam. The cool water of the chalk springs contain a rare species of stenothermic flatworm (Platyhelminthes; Tricladida) associated with cold surface waters or subterranean groundwater that is only known from this location within the region. The springs now depend upon artificial flow augmentation during drier periods, due to the impact of local groundwater abstraction from the chalk aquifer for public water supply.

Located to the southwest of the village is Arbury Banks, the remains of an Iron Age hill fort which have been largely removed by agricultural activity. 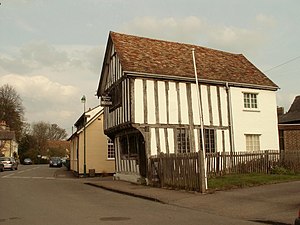 The village is served by Ashwell and Morden railway station which is about a mile and half from the centre of the village in the hamlet of Odsey in Cambridgeshire.

The village is a "green oasis" of trees in contrast to the busy surrounding agricultural landscape.