Appleford-on-Thames is a pretty village in northern Berkshire, on the south bank of the River Thames about two miles north of Didcot.

Appleford has a village hall,[1] a Women's Institute[2] and a public house, the Carpenter's Arms.

Evidence of a Romano-British settlement has been found in a field south of the parish church plus ceramics and human burials of the same period at Manor Farm.[3] In 1968 the Appleford Hoard of 4th century Roman pewter ware and ironomongery was found. The hoard is now in the Ashmolean Museum, Oxford.[4]

Anglo-Saxon Appleford was in existence by the last quarter of the 9th century when King Alfred the Great of Wessex granted land there to one of his subjects.[3] The Domesday Book records that in 1086 the manor of Apleford belonged to Abingdon Abbey.[3] It remained so until the dissolution of the monasteries when the abbey surrendered properties including the manor of Apulford to the Crown in 1538.[3] Farming under an open field system prevailed in the parish until 1838 when an enclosure award was made.[3]

The Church of England parish church of St Peter and St Paul was originally a chapelry of Sutton Courtenay.[5] The nave is 12th century Norman and the chancel was rebuilt early in the 13th century.[3] The building was over-restored in the 19th century but on the south side a Norman door to the nave and an Early English Gothic door to the chancel survive.[6] The east and north walls of the chancel have original Early English lancet windows and the south wall has a Perpendicular Gothic window that was added in the 16th century.[3]

In the 19th century the architect Ewan Christian remodelled and extended the nave and in 1885-1886 the architect Willian Gilbee Scott[7] rebuilt the Bell tower|tower and added the spire.[6]

The tower has a ring of six bells, but currently they are unringable.[8] Two of the bells were cast in the 14th century.[9] Samuel Green built the organ in 1777 for Abbey House of Sutton Courtenay. It was transferred to Appleford parish church at a later date. 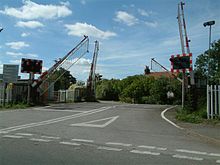 In 1844 the Great Western Railway opened an extension from Didcot to Oxford, passing through Appleford parish and crossing the River Thames just north of the village. The new line included a station at Appleford, but the station was closed after just five years. In 1933 the GWR opened a new halt on the site, which continues in service today as Appleford railway station.