Anstey is a large village in Leicestershire, to the northwest of Leicester. Its population was about 6,000 at the 2001 census.

The village is separated from Leicester by the Rothley Brook, Castle Hill Park and the A46, and it borders the villages of Glenfield, Groby, Newtown Linford, Cropston and Thurcaston as well as the suburb of Beaumont Leys and Anstey Heights. To the northwest lies Bradgate Pk]].

Anstey is known as the 'Gateway to Charnwood Forest'. It is a combination of traditional Midlands village (with two village greens - the top green and bottom green) and an industrial town (with several 19th-century hosiery factories, many of which are now being turned into apartments) which is made up mostly of a number of small estates, both council and private which are intertwined, often with no clear border.

Anstey dates back to Anglo-Saxon times, as witnessed by its name, from the Old English rendered as Hanstige (later Anstige), meaning a narrow forest track (specifically the meaning is either 'one-way' or 'steep road'[1]). Anstey was positioned between Charnwood Forest and Leicester Forest.[2]

The place-name of Anstey is first recorded in Domesday Book when it was held by one of the county's largest landholders, Hugh de Grandmesnil, castellan of Leicester.[1] At the time it was a small farming community.[3]

Anstey appears to have had its origins in two distinct settlement foci, each associated with a separate manor, one associated with Leicester Abbey and one with the Ferrers of Groby.[1]

Whilst developing the site for the new Co-op store in 2002 archaeologists were called in and found remains dating back to the 12th century. A plaque recording this has been placed on the wall of the new shop.

It is believed that Anstey once had a sizable military force - in 1431 William Porter "furnished XIX hommes and IX archers".[4]

When Bonnie Prince Charlie's army moved south during the 1745 rebellion, although the main body of troops were turned back at Derby, a foraging party reached the commons of Anstey.[4]

Local industry included hosiery from the eighteenth to the nineteenth century, leading to a rise in population to around 600 by 1800.[5] By 1845 there were 300 people employed as framework knitters in the village.[6] A decline in the industry in the middle of the nineteenth century saw a fall in the village's population, although hosiery manufacture continued in the village until the mid-twentieth century.[7] Boot and shoe manufacture became a more important part of the village's work between 1860 and 1900, and the first employer in Leicestershire described as a "boot and shoe manufacturer" appeared in Anstey in 1863.[8] The village's population rose to over 2,500 by 1900, with a corresponding rise in house-building.[7] Anstey became an independent parish in 1866, having previously been a chapelry of Thurcaston.[1] A number of related industries developed in the village, including tanning and box-making, the latter still present in the village.[9] One of the largest companies in the village was the Anstey Wallpaper Company, which occupied a site east of Cropston Road now filled with houses and the new Co-op store. Nearly all the local factories have now either been demolished or converted into flats. By 1971, the population of the village had risen to almost 6,000.[10] The village is still the home of Ulverscroft Large Print Books Ltd., known for their large-print editions of popular books, published since 1964.[11]

The most notable family of Anstey was the Martin family, who lived in the village from the 13th century until 1892.[12] Two members of the family held the position of Lord Lieutenant of Leicestershire, and the local high school is named after them.[12] They lived at Anstey Pastures (now demolished),[13] before moving to The Brand in 1892.

Famous past Anstey residents include Ned Ludd (Ludlam),[12] the machine-wrecker whose name was appropriated by the Luddites - whose name was adopted in a recent household development in the village: Ned Ludd Close.

According to legend, the last wolf to be killed in England was shot in a forest "near Anstige in Wolfdale".[12] Wolfdale was a nearby district towards Newtown Linford, and the name has survived in a slightly altered form with Wooldale Close, one of the streets in the village.

There are Church of England, United Reformed Church and Methodist churches in the village.

The parish church of St. Mary is on Bradgate Road, just out of The Nook, has the remains of a 15th-century preaching cross and was previously part of the Parish of Thurcaston.

The United Reformed Church is further up Bradgate Road, as well as the church rooms which are now only used for storage.

The Methodist church stands near The Nook on Cropston Road, and is a medium-sized church serving the community, being part of the Leicester West Circuit of the Oxford and Leicester District of the Methodist Church. An earlier Methodist church was located on the opposite side of the road to the current church, until it was demolished in the 1980s. 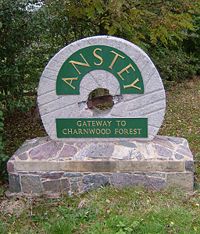 Anstey still retains some of the charm of a traditional village particularly on the area immediately north of the village centre, but due to its industrial background there are many small terraced houses as well as some pre-fabricated post war council houses in the 'Dutch barn' style. The large houses towards the top of Bradgate Road change into terraced houses in the old industrial area, and then modern suburbia out towards Link Road, where the Anstey Martin school can be found. Just off the Nook is Latimer primary school, named after Bishop Hugh Latimer, the martyr. 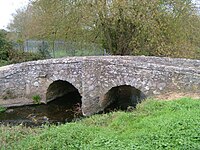 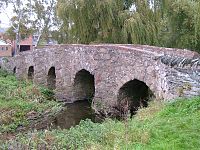 The Rothley Brook flows through the village on its way to the River Soar, and there are two ancient bridges (the Packhorse Bridge and King William's Bridge) and an old water mill. The packhorse bridge is on the route of the original road from Leicester. King William's Bridge is so named because when King William III planned to visit the Grey family at Bradgate in 1696, the existing crossings of the Rothley Brook were found to be too narrow for the Royal coach, so a new bridge had to be constructed.[4]

Anstey has a good range of local shops and services, and pubs - The Coach and Horses, The Crown and The Old Hare and Hounds.

In the past Anstey had two cinemas, the Savoy on Cropston Road which was later used as a petrol station/garage before being converted into a pub/restaurant and eventually a furnishings shop, and another on Ellis Street, which now sells baby clothing.

Anstey has three recreation grounds - the main park ("The Reccy") off Stadon Road which has facilities including floodlit multi play/tennis court area, swings, slides, football pitch and a small area for younger children. From May 2009 it has a kicking wall and shelter to the side of the Jubilee Hall (APC office) built by Anstey Parish council. There is a less well equipped one near Link Road which is occasionally used by the Anstey RFC. Millfield Close also has a small area with play equipment on, which is rented from Charnwood Borough Council.