Alton Pancras is a small village in Dorset; a place which at the 2011 census had a population of 175 across the whole civil parish. 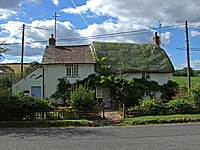 The village church is dedicated to St Pancras, and this dedication provides part of the village name. The parish was formerly a liberty,[1] the manor owned by the Dean and Chapter of Salisbury Cathedral, and before they were united there were two manors, called Alton Borealis and Alton Australis (North Alton and South Alton), which constituted the endowment of two prebends in the Cathedral.[2]

Evidence of prehistoric human activity within the parish includes two round barrows on the hills to the east of the village (one on West Hill and one on Church Hill), the remains of 'Celtic' fields and strip lynchets on many of the surrounding hills, and a possible settlement just south of the summit of Church Hill. Dating is not definite but the 'Celtic' fields were probably in use between the Bronze Age and the end of the Romano-British period. The possible settlement is probably Romano-British. Subsequent cultivation, particularly in modern times, has destroyed much of the evidence.[3][4]

The village was apparently called Awultune in the Saxon period, meaning 'village at the source of the river' (the River Piddle).[5] The village was previously two separate settlements: Barcombe and Alton, both of which had their own open field system.[3] In 1086 in the Domesday Book the village was recorded as Altone. It had 26 households, was in Cerne, Totcombe and Modbury Hundred, and the tenant-in-chief was the Bishop of Salisbury.[6][7] The village name incorporates that of the parish church, dedicated to the little-known St Pancras of Rome: by the time of the Battle of Agincourt (1415), was known as Aulton Pancras. However, in Christopher Saxton's map of 1575 it is still known as 'Ælton' and in John Speed's map of 1610, it is listed as 'Alton'. In a later 1760 map by Emanuel Bowen, the village is listed as 'Alton Pancras'.

The current church was restored]] in the 19th century after an earlier Norman church was near collapse. All that remains of the old church is the 15th century tower and a Norman arch. The church organ used to be a fairground organ. The floor tiles were created by Poole Pottery. 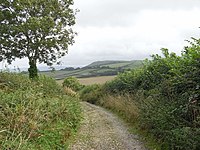 Barnes's Lane on the northern boundary of the parish

Alton Pancras civil parish covers 2,280 acres at the head of the valley of the River Piddle.[3] The valley is on the dip slope of the Dorset Downs and drains from north to south. Several small side combes extend east and west. In the east the parish includes part of a tributary valley at Watcombe Bottom, north of Plush, and in the north-east it extends north of the escarpment to Alton Common in the Blackmore Vale.[8] The underlying geology of the parish is mostly chalk, except for the Alton Common extension, which is on greensand, gault and Kimmeridge clay.[3]

Alton Pancras village is sited in the valley near the source of the River Piddle at an altitude of about 410 feet above sea level. The altitude of the parish is between about 835 feet at its highest point on the hills to the west, to about 360 feet at its lowest point where the river leaves the parish in the south.[8] The broadcaster and agriculturist Ralph Wightman, who was born and lived in the nearby village of Piddletrenthide, described the hills surrounding the village as "very much in the centre of Dorset".[9] All of Alton Pancras parish is within the Dorset Area of Outstanding Natural Beauty.[10] Horse Close Wood on Alton Common is a Woodland Trust wood, though it is not open to the public.[8][11]