The parish includes the neighbouring hamlet of Westridge Green.

Aldworth was recorded in the Domesday Book as Elleorde, though to be a rendering of the Old English Ealdweorþ meaning "Old Place". During the 12th century it was known as Aldewurda. In the Middle Ages there was a fortified manor or castle at Aldworth. [1]

La Beche Castle once stood on the site of what is now merely Beche Farm in Aldworth.[2] This was the main residence of the De La Beche family, after whom it was named.[2] They were a well-known family of mediæval knights holding many high positions[1] at court since at least 1260.

The De La Beche family were powerful landowners and knights in the 14th century.[1] Many of them were retainers to the king, warders to the Tower of London, and sheriffs of Oxfordshire and Berkshire. The family were influential during the reign of Edward II and Edward III, and were embroiled in the royal intrigue of the time.[1] Sir Phillip was imprisoned in Scarborough Castle from 1322 to 1327, but later pardoned by King Edward III. His father, also Sir Philip was gaoled and later pardoned during the reign of Edward II. 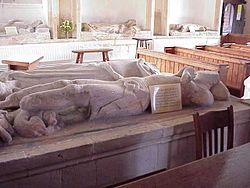 The parish church is Saint Mary the Virgin. It contains numerous effigial monuments to the De La Beche family.[3] The collection is the largest number of mediæval memorials to a single family in a parish church.[1] The figures are supposed to be life size representations but they show some of the knights as over seven feet tall, which has led to their being called the Aldworth Giants. Originally thought to have been erected by the most influential member of the family, Sir Nicholas De La Beche (sometimes erroneously called 'Lord De La Beche')[4]) in the 1340s, historians now suggest they date from various periods.[3]

Many of the effigies were damaged by Parliamentarian iconoclasts during the English Civil War in the 17th century. Many of the knights are missing the lower part of their legs, noses and arms, presumably because they were the easiest parts to break off. Parliamentarians may have seen the giants as a symbol of royalty, although many churches were ransacked in the same period.

The ashes of the poet Laurence Binyon were scattered in the churchyard[1] and there is a slate memorial to him. Alfred, Lord Tennyson's parents-in-law are buried here.[1]