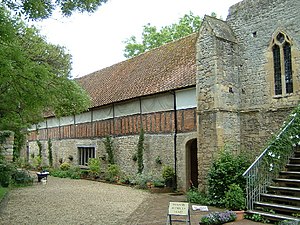 The Long Gallery at Abingdon Abbey. 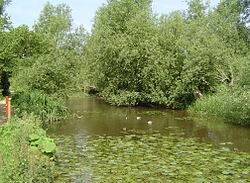 View from Abingdon Lock of the watercourse to the Abbey cut by the monks between 955 and 963.

The abbey was supposedly founded in 675 either by Cissa, viceroy of Centwine, king of the West Saxons, or by his nephew Hean, in honour of the Virgin Mary, for twelve Benedictine monks.[1] Cissa was buried here, as well.

Endowed by successive West Saxon kings, it grew in importance and wealth until its destruction by the Danes in the reign of King Alfred, and the sequestration of its estates by Alfred because the monks had not made him a sufficient requital for vanquishing their enemies. By the 950s the abbey was in a decayed state, but in about 954 King Eadred appointed Æthelwold, later Bishop of Winchester, abbot. He was one of the leaders of the Benedictine Reform, and Abingdon then became the second centre of the Reform (after Glastonbury).[2] There is a collection of 136 charters granted to this abbey by various Saxon kings, and the Chronicle of the Monastery of Abingdon was written at the Abbey in the 12th century.

Abbots after the Norman Conquest included Faritius, physician to Henry I (1100–17), and Richard of Hendred, for whose appointment the King's consent was obtained in 1262. He was present at the Council of Lyon in 1272. The last abbot was Thomas Pentecost alias Rowland, who was among the first to acknowledge the Royal Supremacy. With the rest of his community he signed the surrender of his monastery in 1538, receiving the manor of Cumnor for life or until he had preferment to the extent of £223 per annum. The revenues of the Abbey (26 Hen. VIII) were valued at £1876, 10s, 9d.

Ælfric of Abingdon was originally buried here, before being translated to Canterbury Cathedral. Bishop Sideman was buried here, too. As was Margaret, Countess of Pembroke, and Fulk FitzRoy, too. 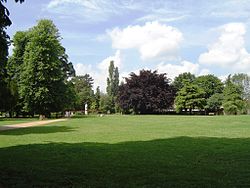 Abingdon abbey church covered the whole of this park space as far as the Queen Victoria statue to the west.

There is nothing to see today of the abbey church. There are some 'ruinous' arches in the 'Abbey Gardens', but this is really a folly built in the 1920s. Some of its architectural features are dubiously said to have come from the old abbey. 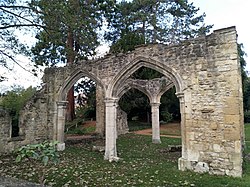 Part of the remaining ruins of Abingdon Abbey's folly.

Associated monastic buildings do, however, survive, including the Abbey Exchequer, the timber-framed Long Gallery, the Abbey bakehouse, (all in the care of the Friends of Abingdon Civic Society) the Abbey gateway, St John's hospitium (pilgrims' hostel) and the Church of Saint Nicolas.

One of the original fireplaces was removed and is now still intact in Lacies Court.

The Unicorn Theatre is now located in part of the Abbey.[3]