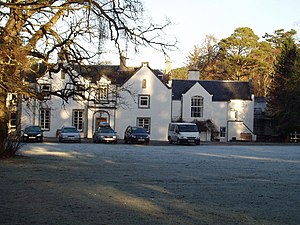 Abernethy and Kincardine is a parish mostly in Inverness-shire but extending over the border into the detached part of Morayshire. The name "Abernethy" is derived from the local River Nethy ("aber" is Pictish for a river mouth or junction). The name Kincardine is of mixed Gaelic and Pictish origin, "ceann" being Scots Gaelic for head and "cardden" the Brythonic/Pictish for a wooded area; the latter element also features as "garten" in other nearby placenames.

The current main village, Bridge of Nethy, now more well known as Nethy Bridge was located around the confluence of the River Nethy and the Duack Burn; its earlier growth was mostly upriver along the banks of the Nethy.

The Church of Scotland parish was created in the 16th century by the combination of the ancient parishes of Kincardine and Abernethy, both of which have ancient origins and past or later associations with other churches. Both parish churches (and associated burial grounds) remain in use.

The baptism registers (up to 1856, since deposited with the Registrar General with microfilm copies at a number of places) have poor coverage around the 1820s, apart from those events not recorded if the parishioners were members of other churches. The pre-1855 marriage registers are in a similar condition but also contain some "extra" entries concerning parishioners who married in other parishes or denominations, including some Roman Catholic marriages (indicated as "married by a priest").

Changes in modern church-going habits have led to Church of Scotland ministers usually covering more than one of the original parishes, in this case resulting in the once "United Parish" of Abernethy and Kincardine becoming separated again and the parts joined to neighbouring parishes; the 2006 circuits for the area are now advertised[1] as "Abernethy, Cromdale and Advie" and "Boat of Garten and Kincardine with Duthil Carrbridge".

This church[2] is on the West side of the Nethy Bridge to Grantown-on-Spey road, beside the ruins of Castle Roy. The burial ground has been extended in recent years and is in current use for new lairs. Most pre-1855 inscriptions have been recorded and published [3] A rough-surfaced roadside parking area with space for a number of vehicles gives level access to the church and also serves Castle Roy (to which casual pedestrian access is officially not recommended for safety reasons).

This church[4] is on a small knoll set back from the road between Auchgourish and West Croftmore. It is somewhat smaller than Abernethy Kirk and few new lairs have been created in recent years but burials still take place in existing lairs. Most pre-1855 grave inscriptions have been recorded and published.[5] The churchyard contains a very old Yew tree as often found where such a site has pre-Christian associations. There is usually room for two or three vehicles to park on a grassed area beside the churchyard gate; the lane leading to the church is gated to protect animals in the adjacent fields but not locked.