Abbotsford House is a historic country house in Roxburghshire, on the south bank of the River Tweed just south of Galashiels. It is famous as the residence of Sir Walter Scott, the great romantic novelist.

The house is a Category A Listed Building. 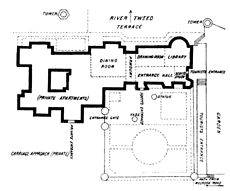 The house began as a modest farmhouse, but was expanded into a grand mansion by Sir Walter Scott. In making his additions, Scott built into the walls many sculptured stones from ruined castles and abbeys of Scotland.

In the house he gathered a large library, a collection of ancient furniture, arms and armour, and other relics and curiosities, especially connected with Scottish history, notably the Celtic Torrs Pony-cap and Horns and the Woodwrae Stone, all now in the Museum of Scotland.

The general ground-plan is a parallelogram, with irregular outlines, one side overlooking the Tweed; and the style is mainly the Scots Baronial. Into various parts of the fabric were built relics and curiosities from historical structures, such as the doorway of the Old Tolbooth in Edinburgh.

Sir Walter rescued the "jougs" from Threave Castle in Kirkcudbrightshire and attached them to the castellated gateway he built at Abbotsford.

The nucleus of the estate was a small farm of a hundred acres called Cartleyhole, nicknamed Clarty (‘muddy’) Hole. This was bought by Scott in 1811 on the lapse of his lease of the neighbouring house of Ashestiel. He first built a small villa and named it Abbotsford, creating the name from a ford nearby where previously abbots of Melrose Abbey used to cross the river.

The last and principal acquisition was that of Toftfield (afterwards named Huntlyburn), purchased in 1817. The new house was then begun and completed in 1824.

Scott had only enjoyed his residence one year when (1825) he met with a reversal of fortune which involved the estate in debt. In 1830 the library and museum were presented to him as a free gift by the creditors. The property was wholly disencumbered in 1847 by Robert Cadell, the publisher, who cancelled the bond upon it in exchange for the family's share in the copyright of Sir Walter's works.

Scott's only son Walter did not live to enjoy the property, having died on his way from India in 1847. Among subsequent possessors were Scott's son-in-law, John Gibson Lockhart, James Hope-Scott QC, and his daughter (Scott's great-granddaughter), the Hon. Mrs Maxwell Scott.

Abbotsford House from the gardens

The house was opened to the public in 1833, but continued to be occupied by Scott's descendants until 2004. The last of his direct descendants to inhabit Abbotsford was his great-great-great-granddaughter Dame Jean Maxwell-Scott (8 June 1923 - 5 May 2004), who inherited it from her elder sister Patricia in 1998. The sisters turned the house into one of Scotland's premier tourist attractions after they had to rely on paying visitors to afford the upkeep of the house. It had electricity installed only in 1962. Dame Jean was at one time a lady-in-waiting to Princess Alice, Duchess of Gloucester, patron of the Dandie Dinmont Club, a breed of dog named after one of Sir Walter Scott's characters; and a horse trainer, one of whose horses, Sir Wattie, ridden by Ian Stark, won two silver medals at the 1988 Summer Olympics in Seoul, South Korea.

The house stands beside the Tweed in a fine setting. Across the river though (in Selkirkshire) a property developer has applied to build a housing estate, to which Historic Scotland and the National Trust for Scotland object.[1][2]

Abbotsford gave its name to the Abbotsford Club, founded by William Barclay Turnbull in 1833 or 1834 in Scott's honour, and a successor to the Bannatyne and Maitland Clubs. It was a text publication society, which existed to print and publish historical works connected with Scott's writings. Its publications extended from 1835 to 1864.[3]

In 2012, a new Visitor Centre opened at Abbotsford which houses a small exhibition, gift shop and Ochiltree's Dining, a cafe/restaurant with views over the house and grounds.

In 2014 Abbotsford won the European Union Prize for Cultural Heritage for its recent conservation project.[4][5]