Somersham is a village in Huntingdonshire on the River Great Ouse upstream of Earith.

There has been a settlement in this corner of the county for at least 2,500 years and probably much longer than that. The village may not be full of ancient buildings, but it possesses a rich heritage of recorded history.

Somersham lies on the Greenwich Meridian line. A marker on the pavement in the High Street denotes the location as calculated in October 1884.

The village has four pubs. The Old Ferry Boat Inn, in nearby Holywell, claims to be the oldest inn in the country. 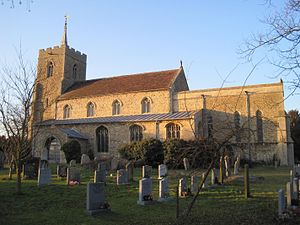 The manor of Somersham was held by the Abbots (later Bishops) of Ely who obtained it from the Ealdorman Britnoth following his death at the Battle of Maldon in 991.

The manor passed to the Crown when Elizabeth I seized it at the end of the 16th century and it remained in royal hands thereafter, with an interruption after the English Civil War, when Parliament sold the manor to Robert Blackborne of Westminster for £19,884 in 1653, who in turn sold to Oliver Cromwell's brother-in-law Valentine Walton, resulting in a suit in Chancery between the parties when it was claimed that the manor had been charged for the payment of certain troops of the Commonwealth army.[1] Following the Restoration in 1660, the manor was returned to the Crown.

There was a substantial manor house at Somersham with formal gardens dating to the 12th century and possibly earlier. A Tudor palace was constructed over the mediaeval building by Bishop Stanley under Henry VII but by the time the Hammond family came into possession in the late 17th century the buildings were in a poor state of repair. They were pulled down in the middle of the 18th century.

During the 18th century there was a spa just outside the town that was actively promoted by one of the royal surgeons. Thomas Hammond, a poet who died in 1742 was born and brought up in Somersham, his work remained popular throughout the 18th and 19th century being reprinted several times but is no longer well known today.