Rock Gun Battery is an artillery battery in the British overseas territory of Gibraltar, standing at the peak of the North Face of the Rock of Gibraltar, at 1,350 feet: a height suppasses only by O'Hara's Battery. It is on Middle Hill, at the northern summit of the Rock. 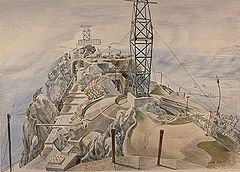 In October of 1779, during the Great Siege of Gibraltar (1779–1783), the military operations at the recently constructed Green's Lodge Battery were so successful against the Spaniards that it was decided to establish a battery even higher on the North Face, at the summit.[1] The chosen site at Middle Hill was leveled and work was begun on a road to access the highest point of the North Face. However, the endeavour required some time, and the enthusiastic artillery gunners became impatient, not wanting to wait for completion of the new road. On their own initiative, they utilised a block and tackle system to drag a 24-pounder up the face of the Rock. After several days and much effort, they were successful. The platform for the gun was completed on 12 October 1779 and the gun was mounted on a traversing carriage. Firing from the battery began the following day. The emplacement was named Rock Gun Battery. From that elevated vantage point, the gunners were able to observe the operations of the enemy and fire upon the Spanish camp.[1][2]