Portlaoise, historically also known as Maryborough from 1557 until 1929, is the county town of County Laois, formerly Queen's County, in midst of the Republic of Ireland. The recorded population in 2011 was 20,145.

The site where the present town is situated is referred to in the Annals of the Four Masters as Port Laoighisi during the 16th century. The present town originated as a settlement around the old fort, "Fort of Leix" or "Fort Protector", the remains of which can still be seen in the town centre. Its construction began in 1548 under the supervision of the then Lord Deputy Sir Edward Bellingham in an attempt to secure English control in the county following the exile of native chieftains the previous year. The fort's location on rising ground, surrounded to the south and east by the natural defensive barricades of the River Triogue and an esker known locally as 'the Ridge', greatly added to its strategic importance.

The town proper was established by an act of Parliament during the reign of Queen Mary I in 1557. It was named Maryborough and the county was named Queen's County in her honour. The area had been a focus of the rebellion of Ruairí Óg Ó Mórdha, a local chieftain who had rebelled and had lost his lands, which the Crown wanted to be settled by reliable landowners. For the next fifty or so years, the new English settlers in Maryborough fought a continual, low-scale war with the Gaelic chieftains who fought against the new settlement.

In 1570, a charter of Queen Elizabeth I raised the town to the rank of borough. This allowed the establishment of a Corporation of the Borough, a body which consisted of a burgomaster, two bailiffs, a town clerk, and a sergeant at arms, as well as various other officers, burgesses and freemen. Until Act of Union took effect in 1801 the town returned two members to the Irish House of Commons. The Corporation itself existed until 1830.

In 1929, a few years after the foundation of the Irish Free State, the town was renamed Portlaoighise (later simplified to Portlaoise) and the county was renamed County Leix, later Laois. A number of other towns in the Free State also reinvented Irish names during this period.

The town has long been a major commercial, retail, and arts centre for the Irish Midlands. Until the early 20th century, the main industries of the town were flour milling and the manufacture of worsted fabric. Since their respective declines, the government has been one of the major employers in the town: the maximum-security Port Laoise Prison, which houses the majority of the Irish Republican terrorist prisoners sentenced in the Republic, the Midlands Prison, and the Department of Agriculture are all large-scale employers in the town.

Retail spaces includes the Dunamaise Arts Centre which comprises a cinema, performance space and exhibition space, the Portlaoise Leisure Centre, Laois Shopping Centre, Kyle Centre, Parkside Shopping Centres and a retail park on the Timahoe Road. The town hosts the regional finals of the Rose of Tralee in June. It is also home to Electric Picnic which takes place the first weekend in September every year.

Portlaoise is one of Ireland's fastest growing towns with a 37.9% increase from 2006 to 2011. It has a large immigrant community (30% of total population) mainly from Poland, Slovakia, Lithuania, Nigeria and Latvia. 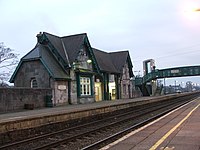 Portlaoise stands at a major crossroads in the Irish roads with major roads to Dublin, Limerick, Cork, although construction in the 1990s of the M7 motorway, which bypasses the town, has reduced traffic congestion in the town centre.

The town has a railway stations served by trains between Dublin and Cork and by Dublin commuter services.