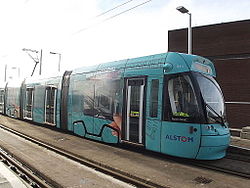 Nottingham Express Transit (NET) is a 20-mile-long[1] tramway in Nottingham. The system opened to the public on 9 March 2004 and a second phase, that more than doubled the size of the total system, opened on 25 August 2015.

Planning and construction of phase one

Nottingham and the surrounding urban area is the UK's seventh largest and third fastest-growing urban area. However traditionally Nottingham's economy was to a large extent based on manufacturing and coal mining, and in the second half of the 20th century the area was affected by the decline in these industries. Additionally a high population density, a road system constrained by crossings of the River Trent, and a concentration of retail and entertainment outlets in the city centre lead to road congestion and high bus usage. In the late 1980s, Nottingham City Council and Nottinghamshire County Council identified the possibility of using a modern tramway as a means of stimulating urban renewal, as well as tackling road congestion.[5]

In 1998, the Minister of State for Transport, John Reid, confirmed the availability of £167 million funding for a new tram system, to be known as Nottingham Express Transit, to run between Nottingham and Hucknall.[6]

In March 2000, the joint promoters, Nottingham City Council and Nottinghamshire County Council, awarded a 30-year Private Finance Initiative concession to the Arrow Light Rail Ltd consortium, with responsibility for the design, funding, building, operation and maintenance of the line. The consortium was made up of Adtranz (later subsumed into Bombardier Transportation), who were responsible for the trams, Carillion, who were responsible for the infrastructure, Transdev and Nottingham City Transport (NCT).[5][7]

As built, the system was 8.7 miles miles long and served 23 tram stops. Construction cost a total of £200 million.[7]

Opening of phase one

Nottingham Express Transit began operation in March 2004, with a line operating north from a terminal at Station Street, just to the north of Nottingham railway station] through the city centre, branching to serve twin termini at Hucknall and Phoenix Park. Once the line was complete, operation was sub-contracted by Arrow Light Rail to the Nottingham Tram Consortium (NTC), an equal partnership between Transdev and Nottingham City Transport.[5]

The new line proved successful, leading to an increase of public transport use for the Nottingham urban area of 8% in the five years to 2008, together with a less than 1% growth in road traffic, compared to the national average of around 4%.[5] Nottingham had exceeded the most optimistic predictions, carrying 9.7 million people in 2005. This bolstered the case for the construction of new lines.

Planning and construction of phase two

In January 2003, even before the first phase had opened, the two councils had decided to start consultation on a second phase to serve the urban areas south and west, with routes to Clifton via Wilford, and to Chilwell via Beeston.[5][8]

Approval for phase two was given on 25 October 2006 with the UK Government agreeing to provide up to £437 million in Private Finance Initiative (PFI) credits. The local councils will also provide up to £141 million in PFI credits. The two local councils (Nottinghamshire County and Nottingham City Councils) voted on 22 February 2007 and 3 March 2007 respectively to table an application for a Transport & Works Act Order. The City and County Councils’ application for the order were available to view from 26 April 2007 to 7 June 2007 when it was submitted to the Secretary of State for Transport for consideration. A public inquiry was held in December 2007. The project was given the go-ahead by the government on 30 March 2009.[5][9][10]

Following the local elections in 2009, Nottinghamshire County Council indicated that it was no longer willing to contribute financially to the project, so Nottingham City Council decided to cover the shortfall and be the sole promoter. Nottinghamshire County Council confirmed that it would not obstruct the project.[11] Funding was approved by the government on 31 July 2009.[12] Selecting and appointing the contractor was expected to take two years. Building work was expected to begin in 2011, in two phases, with trams running from 2014. The scheme survived the 2010 Comprehensive Spending Review ordered by the government, and on 24 March 2011 the government confirmed that funding had been approved.[13][14] 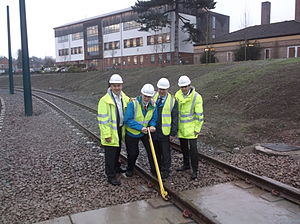 As part of this process, the concession to operate the existing system was terminated. A new concession put out to tender to design and build phase two, to operate and maintain the existing system in the meantime, and to operate and maintain the extended system once completed. Although Arrow Light Rail bid, they lost out to a new consortium known as Tramlink Nottingham Limited, made up of Meridiam (30 per cent), OFI InfraVia (20 per cent), Alstom Transport (12.5 per cent), Keolis (12.5 per cent), Vinci Investments (12.5 per cent), and Wellglade Limited (12.5 per cent). As with the previous consortium, operation was further sub-contracted to a consortium of Keolis (80%) and Wellglade (20%), with maintenance sub-contracted to Alstom Transport. As a result of Wellglade's ownership of Trent Barton, who operate bus services in the Nottingham area, the new concession was referred to, and approved by, the Office of Fair Trading. The finalised contract was signed on 15 December 2011.[2][5][17]

Construction of phase two started in 2012. There were construction delays and by the end of 2014 it was at least 6 months behind schedule. There were complaints from residents affected by works and traders whose businesses have been damaged by the late running construction. Track laying was completed on 11 December 2014.[18][19][20]

The first powered test run on a short section of the line took place by Alstom Citadis tram 222 in the early hours of Friday 22 August 2014, running from Station Street via The Meadows to Wilford, before returning to Station Street. With the completion of track laying, testing of phase two commenced in earnest.

The first section of phase two to open to the public was the new tram station above Nottingham railway station, which replaced the Station Street stop as the southern terminus of the line on 27 July 2015. The remainder of phase two opened at 0600 on 25 August 2015.[21][22][23]

During the planning and construction phases, the initial system (including both branches) was often referred to as line 1, with the line 2 name used for the new line to Clifton and line 3 for the new line to Chilwell. With the publication of the timetables covering through running between the initial system and phase two, this terminology was changed, with line 1 referring to the through service from Hucknall to Chilwell, and line 2 to the service from Phoenix Park to Clifton.[24]

The route from Toton Lane Park and Ride into Nottingham ran the first public services from 06:00 on Tuesday 25 August 2015.[25] 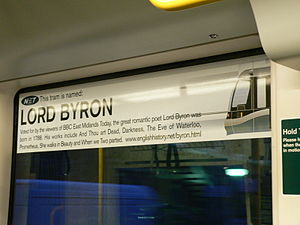 All NET trams are named, tram 205 carries the name of Lord Byron

Trams on each line run at frequencies that vary between 4 and 8 trams per hour, depending on the day and time of day. These services combine to provide up to 16 trams per hour on the common section.[24]

The southern branch of line 1 commences at Toton Lane tram stop, a large Park & Ride site. The site is situated to the west of Chilwell, north of Toton and south of Stapleford, and is just a mile along the Stapleford bypass (A52) from junction 25 of the M1 motorway. The line then proceeds via Chilwell, Beeston, the University of Nottingham, Queen's Medical Centre, the ng2 business park and the northern edge of the Meadows residential area, before reaching Nottingham railway station.

The branch is six miles long, of which about half is segregated. There are 15 tram stops on the branch, and the journey between Toton Lane and Nottingham railway station takes 30 minutes.[24][26]

The southern branch of line 2 commences at Clifton South tram stop, a large Park & Ride site in the city of Nottingham. This is just to the south-west of the large suburb of Clifton, on the A453 road. It then proceeds on street through the heavily built up Clifton Estate before using part of the Great Central Railway formation through the Ruddington Lane area to the village of Wilford. It then crosses the River Trent on the Wilford Toll Bridge, which has been widened to allow pedestrians and cyclists to continue to use it, and runs through the Meadows residential area, before reaching Nottingham railway station.

The branch is 4.7 miles long, of which almost two thirds is segregated. There are 12 tram stops on the branch, and the journey between Clifton South and Nottingham railway station takes 21 minutes.[24][27]

The two southern branches unite at a junction just before Nottingham railway station, which is situated on the southern edge of the city centre. The tramway crosses above the station platforms on its own dedicated bridge that also carries a tram stop that is directly connected to the station concourse.

From Nottingham station the common section runs north through the city centre, passing the Lace Market, the Old Market Square and Nottingham Trent University to the Forest Recreation Ground. To the north is a section of about 0.6 mile (1.0 km), where northbound and southbound trams follow different streets, crossing at each end to run on the 'wrong side'. The two tracks rejoin at Wilkinson Street tram stop, where the depot is situated. Between the station and Wilkinson Street trams run in the street, but all other traffic is heavily restricted or, in some cases, banned altogether. There are Park & Ride sites at the Forest Recreation Ground and Wilkinson Street.

North of Wilkinson Street, the route joins a former Midland Railway alignment, which it shares with the Robin Hood railway line. The two lines run next to each other, segregated by a fence, through Basford to Highbury Vale tram stop, where the two lines again diverge.

Line 1 continues to run alongside the Robin Hood line north of Highbury Vale as far as its terminus. The line serves Bulwell railway station where railway interchange is provided. North of this station, the tram line becomes single track as far as its terminus at Hucknall railway station, albeit with passing loops at each of the three intermediate stops. Hucknall station also provides interchange with the Robin Hood line, as well as being a Park & Ride side.

Line 2 diverges from line 1 at Highbury Vale. After that stop, the line becomes single track as far as its terminus at Phoenix Park tram stop, following the alignment of a former colliery railway. Cinderhill tram stop is the only intermediate stop on this branch, and the only stop on the system where trams use the same single platform in both directions. Phoenix Park is a Park & Ride site.

The system started with fifteen Incentro AT6/5 trams, similar to those used on the Nantes tramway, built by Bombardier Transportation in Derby. They were named after famous local people. The Flexity Outlook Eurotram had also been considered and rejected as its large single-leaf doors did not comply with British door-alarm regulations.

On 8 March 2013, Nottingham Express Transit announced that all trams would be refurbished and receive a new livery and interior.[28] The first tram to be refurbished was 215. Refurbishment of all trams was completed by September 2014. 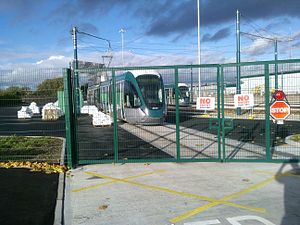 In preparation for the Phase Two extensions to Beeston and Clifton, 22 new Alstom Citadis 302 trams had been ordered. The first Citadis tram (216) arrived at the depot on 10 September 2013. Along with the current Incentro fleet, they ran test operation on the new lines from Summer 2014 and also on the current network.[13] The first Citadis trams (216-221) entered passenger service for the day on 27 July 2014, as part of a trial for the new timetable which was then introduced on 26 August 2014.[29]

The trams are stored and maintained at the Wilkinson Street depot, which was expanded as part of the phase two works.

NET have a road-rail-equipped Unimog truck. A battery-powered shunter is used to move trams on non-electrified tracks within the depot.[30]