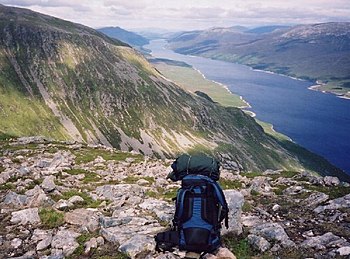 Loch Ericht is a freshwater loch of the Highlands lying across the border between Perthshire and the Inverness-shire. It is 1,152 feet above sea level and has a north-east to south-west orientation.

The village of Dalwhinnie sits at the north east end of the loch. The loch stretches 14½ in length from here and has a surface area of approximately 7 square miles.[1] Loch Ericht is the tenth largest freshwater loch in the Highlands and has a good reputation for its trout fishing.[2]