Gordon is a village in Berwickshire, sitting at the crossroads of the A6106 Earlston to Duns road and the A6089 Edinburgh to Kelso road. It is six miles east of Earlston and four miles west of Greenlaw.

Gordon was once on a branch line of the Berwickshire Railway.[1]

The first Gordon on record is Richard of Gordon, previously of Swinton, said to have been the grandson of a famous knight who slew some monstrous animal in the Merse during the time of King Malcolm III of Scotland. This Richard was Lord of the Barony of Gordon in the Merse. The name is said to derive from the Gaelic 'Gor Dun' meaning great fort. The de Gordons held the lairdship of Gordon for over two centuries and were thought to have built a castle at the former hamlet of Huntly just to the north; they still held lands up to the 18th century.[2]

The Gordon family are the ancestors of the Dukes of Richmond and Gordon and of the Marquis of Huntly.[3] 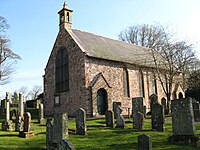 In 1171, the chapel at Gordon, dedicated to St Michael, was transferred by the monks of Coldingham to their counterparts at Kelso in return for the church at Earlston.

The present church was built in 1763 and is a part of the Church of Scotland.

A church of the Free Church of Scotland was opened in 1843,[4] but that building is now used as a private home.

In 1408, Alexander Seton married Elizabeth Gordon, heiress of the Gordon family,[5] and they were granted lands at Greenknowe, just to the west of the village. A descendent of the family, James Seton of Touch, married Janet Edmonstone and it was they who built the tower in 1581. Their initials, IS/IE, are carved above the entrance. Later owners of the tower were Walter Pringle of Stichill, the Covenanter and the Dalrymple family.[6]

The tower is now in the care of Historic Scotland [7][8] and can be visited free of charge.

Gordon has a Church of Scotland kirk, a nursery, a primary school. a lawn bowling club/late night drinking den, a football pitch, a community woodland, children's play park, village hall, a public house/restaurant and the village shop/takeaway. The main street has not changed for many years though there has been much housing development at the north end of the village off Station Road.