Difference between revisions of "Gloucester and Sharpness Canal" 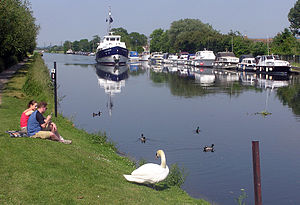 The canal at Patch Bridge

Conceived in the Canal Mania period of the late 18th century, the Gloucester and Berkeley Ship Canal scheme (as it was originally named) was started by architect and civil engineer Robert Mylne. In 1793 an Act of Parliament was obtained authorising the raising of a total of £200,000.[2] The project rapidly encountered financial difficulties - to such an extent that Mylne left the project in 1798. By half way through 1799 costs had reached £112,000 but only 5½ miles of the canal had been completed.[3] Robert Mylne's role was taken over by James Dadford who had originally been engaged as resident engineer on the project in 1795.[4] Lack of funds resulted in the company ceasing to employ Dadford in 1800.[3]

Between 1800 and 1810 various attempts were made to raise money to allow further building but they came to nothing.[3] Moneys from tolls and rents allowed for some improvements to be made to the basin at Gloucester in 1813.[5]

From 1817 onwards the Poor Employment Act meant it was possible for the company to loan money from the Exchequer Bill Loan Commission. This along with further share issues provided enough money to bring the scheme to completion.[6] After these significant delays, the canal opened in April 1827. In the course of its construction the canal had cost £440,000.[7] As opened the canal was 86½ feet wide, 18 feet deep and could take craft of up to 600 tons. The longer of the two locks onto the canal proper was 115 feet long.[7]

By the middle of the nineteenth century it proved possible to pay a small dividend, the debt to the Exchequer Bill Loan Commission having been repaid with the help of a loan of £60,000 from the Pelican Life Assurance Company.[7] In 1871 the last of the debts incurred in the course of funding the canal including the Pelican Life Assurance Company loan were paid off.[8] Where the Severn Railway Bridge (completed in 1879) passed over the canal a swing section was constructed [9] to avoid restricting headroom.

In 1905 traffic exceeded 1 million tons for the first time.[10] Oil was added to the list of cargoes carried by the canal, with bulk oil carriers taking fuel to storage tanks sited to the south of Gloucester.[11] In 1937 the canal was navigated by the submarines HMS H33 and HMS H49.[12]

The canal was nationalized in 1948.[13] At the same time the Sharpness Dock Police which had policed the dock since 1874 were absorbed into the British Transport Police.[14] In 1955 the Board of Survey of Canals and Inland Waterways released a report that, among other things, described the Gloucester and Sharpness Canal as carrying substantial traffic and offering scope for commercial development.[15] 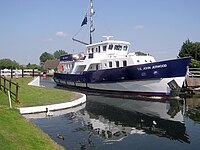 In 1909, following a collapse in the bank of the river, the canal company's chief engineer Mr A. J. Cullis called for old vessels to be run aground along the bank of the Severn, near Purton, to create a makeshift tidal erosion barrier to reinforce the narrow strip of land between the river and canal.[16] Barges, trows and schooners were "hulked" at high tide, and have since filled with silt. More boats have been added, including the schooner "Katherine Ellen" which was impounded in 1921 for running guns to the IRA, the Kennet Canal barge "Harriett", and ferrocement barges built in the Second World War.[17] 1999 saw Paul Barnett commence a privately funded research project which saw the site's 81 vessels recorded and recognized as the largest ships' graveyard in mainland Britain.[18]

By the mid 1980s commercial traffic had largely come to a halt with the canal being given over to pleasure cruisers with the exception of a few passages by grain barges.[11] The oil trade ceased in 1985 with the closure of the petroleum depot at Quedgeley.[9]

In order to allow the A430 south-west bypass to be built the canal had to be diverted. The new section of channel was opened on 6 May 2006.[19] In January 2009 a project began to replace the Patch Bridge swing bridge with a motor powered design instead of the current hand cranked system.[20]

The canal links directly to the Stroudwater Navigation at Saul junction. 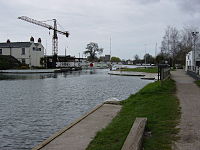 The Gloucester and Sharpness Canal at Saul Junction 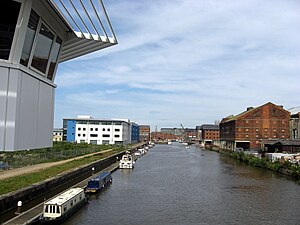 The Canal at the entrance to Gloucester docks