Difference between revisions of "Flow Country" 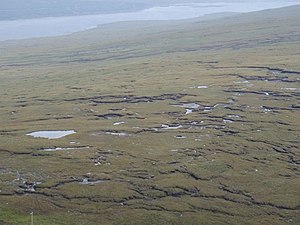 Part of the Flow Country near Maovally in Sutherland

The Flow Country is the name given to the large, rolling expanse of peatland and wetland area of Caithness and Sutherland. It is the largest expanse of blanket bog in Britain and Europe, and covers about 1,500 square miles.

The area is home to a rich variety of wildlife, and is used as a breeding ground for many different species of birds, including greenshank, dunlin, merlin and golden plover.

The Flow Country is on the 2006 UK "Tentative List" as a possible UNESCO World Heritage Site.[1] The application was re-listed in 2010 and Stuart Housden, the director of RSPB Scotland and a member of the Rural Development Council, said:

"This largely unspoilt landscape has thousands of hectares of ancient blanket peat land, making this perhaps the most important area of its type in the northern hemisphere. A global badge would certainly help us to get this special place in better heart. This area was sorely threatened in the 1980s and early 1990s by inappropriate afforestation, but just in time a conservation campaign mounted by the RSPB stopped the worst excesses. Action is now underway to restore the area."[2]

The Flow Country was badly damaged between 1979 and 1987 through the planting of non-native conifer forests and the cutting of thousands of miles of drains [3]. The trees dried the peat out, changing the habitat and destroying its value for birds and other wildlife. The trees were mostly planted on land bought by Fountain Forestry who recognised that this would be attractive to wealthy investors who could claim planting grants and tax relief against all their other income, at a time of high personal taxation. The ploughing of the bogs and tree planting helped to reduce local unemployment which was among the highest in the United Kingdom.

In 1987 the Nature Conservancy Council launched a report in London that was highly critical of the foresters. In 1988 Nigel Lawson, recognised that a tax break for wealthy investors was doing enormous harm to the last real wilderness in the United Kingdom and scrapped the forestry tax reliefs. This immediately halted further planting and encouraged the Forestry Commission to adopt a much broader approach that respects existing landscapes.

In an effort to restore the damage, the Royal Society for the Protection of Birds (RSPB) have bought a large area in the centre of the Flow Country and have created the Forsinard nature reserve. More than 4,900 acres has been bought back from Fountain Forestry and the young trees felled and allowed to rot in the plough furrow in the hope and expectation that in 30-100 years the land will revert to being peat bog.