The Eildon Hills stand just south of Melrose in Roxburghshire; a triple peaked hill overlooking the town. The name is written either in the plural or the singlualr, as ‘’’Eildon Hill’’’, as it is in effect a single hill of three peaks. The highest summit is 1,385 feet above sea level and it overlooks Teviotdale to the south.

The north hilltop of the three is surrounded by over 3 miles of ramparts, enclosing an area of about 40 acres, in which at least 300 level platforms have been cut into the rock to provide bases for turf or timber-walled houses.

The Eildon Hills are surrounded by a large area of woodlands, home to wildlife such as roe deer, badgers, stoats and foxes. In winter and early spring the Eildon Hills are often covered in snow, although snow lasts longer on the higher slopes of the neighbouring Southern Uplands.

Excavations have found evidence that the hill fort was occupied by 1000 BC, in the Bronze Age. The ramparts seem to have been built and rebuilt in three phases. At its peak the population of the hill could have been 3000 to 6000, the largest known in Scotland from this period. Evidence has not been found of a significant population in the immediate pre-Roman period.

In the 1st century the Roman army built the massive fort of ‘’Trimontium’’ at the foot of the hill on the bank of the River Tweed; its name means “Three Hills”. In association with the fort the Romans built on the summit of the hill fort a signal tower with a tiled roof in an enclosure with a diameter of 36 feet. Presumably the hill fort had by then been abandoned, or the Romans drove the local chieftain off it. However, finds including Roman coins and pottery have suggested that some of the house platforms were again in use in the 2nd to 4th century. It was once widely believed that this Trimontium might be the Trimontium of the Selgovae that had been mentioned by the Roman geographer Ptolemy, but the source of the information was later discredited.

There is some evidence that prehistoric peoples regarded the Eildon Hills as a holy place and scholars believe they may have been a place of ceremonial gatherings. There are several springs around the base of the hills, which in the Middle Ages were dedicated to Christian saints.

It is possible that the Hill was formed deep beneath the Earth's surface as ancient laccoliths. 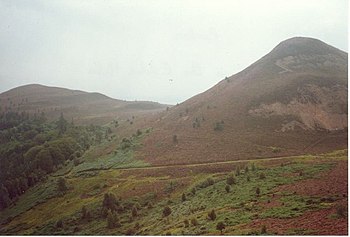 Eildon is said to be a "hollow hill", and is mentioned in the legend of Thomas the Rhymer. Some believe Thomas went under the hill itself, and certainly part of the ballad occurs in the vicinity. Sir Walter Scott tells the tale of a horse dealer who is paid in 'ancient coin' by an elderly buyer in old-fashioned dress and taken inside the hill at night. A host of armed knights lie asleep at their horses' feet; their sleeping leader is King Arthur. Shown a horn and a sword, in confusion the dealer blows the horn: the men begin to awake and a loud voice indicates that he has been proved a coward for not seizing the sword first. A whirlwind ejects him from the chamber and outside he tells his story to some shepherds before dropping dead of exhaustion. Scott identifies the elderly man as Thomas the Rhymer.[1][2]

The volcanic rock was "said to have been cleft in three by the wizard Michael Scot when he was out of employment", and this story is repeated in James Hogg's 1823 novel - The Three Perils of Man.

The legend of the hollow hill was used in George MacDonald Fraser's comic novel The Reavers; the Spanish plotters have their secret headquarters in a cavern in the Eildon Hills, where they wait to ambush King James.