Yielden or Yelden is a village and ancient parish in Bedfordshire, adjacent to the border with Northamptonshire and close to that of Huntingdonshire. It lies on the River Til which feeds into the Great Ouse valley and is about 230 ft above sea level. It is approximately 14 miles north of Bedford, 3¾ miles south-east of Higham Ferrers and 6¾ miles west of Kimbolton and is in the Hundred of Stodden. The countryside around the village rises to about 300 ft above sea level, is generally open and rolling in nature and is predominantly used for agricultural purposes. The centre piece of the village is the Castle Mound or Yielden Castle the site of a Norman motte-and-bailey castle. This is now a complex of grassed over earthworks dominated by a central mound. Other notable features include the church of St Mary, a Wesleyan Chapel built in 1884, the Chequers Public House and the Yelden Village Hall. It has a present population of roughly between 150 – 200 adults and 50 – 100 children living in about 90 residences. It is in the civil parish of Melchbourne and Yielden.

Yelden has its own book under the title 'Yelden Past and Present' produced by the Yelden Parish Study Group that was first printed in 1972. It has since been updated and reprinted in 2001 and is the definitive source of historical information about the village. Much of the information in this article has been made with reference to this publication.

Archaeological excavations carried out by Bedfordshire County Council along with other historical works have shown evidence of a near continuous occupation in the village dating back to the late Neolithic and early Bronze Age (c.2000 -800 BC). Latterly the village appeared in the Domesday Book of 1086 as 'Giveldene' where an account of its history was recorded.

This is a significant archaeological site and one of the most interesting of its type in the county. It was the site of a Norman Motte and Bailey Castle that from Domesday to the 13th century was the stronghold of the Trailly family. It is an imposing feature with a central conical mound rising to about 40 feet above the bottom of its north moat. It is in two levels with two extensive baileys and is not surrounded by a moat. There have been suggestions that prior to Norman times it was occupied by the Iceni, an ancient tribe of Britains and that they battled with the Romans at the site but opinions differ as to the accuracy of this assertion. In any event records show that by 1360 it had fallen in disuse and ruin.

The Church of St Mary

It is a good example of a village church mainly in the Decorated style. Originally the Trailly family received it from the Monks at Thorney abbey early in the 12th century and was confirmed to them by a charter of Pope Alexander III in 1162. Although Norman in origin its shows no indication of this in its construction. It consists of a Nave and Chancel dating back to the early 13th century and had been considerably re-modelled since then, the most notable feature being the tower and broach spire.

World War II was a significant time in the history of the village because of its close proximity to Chelveston Aerodrome, which was originally built with three runways in 1941. An Airborne Forces Experimental Establishment detachment began flying from the aerodrome in 1942 with Horsa gliders towed by Short Stirlin] aircraft. Later in 1942, following the entry of the United States into the war, it eventually became the home of the United States Army Air Forces 305th Bombardment Group, which had four squadrons of Boeing B-17 Flying Fortresses pioneering the daylight formation and bombing procedures of the time. There were almost 2,000 personnel based at the aerodrome flying a total of 337 missions between November 1942 and April 1945. During these missions, a total of 22,362 tons of bombs were dropped on enemy targets and 332 enemy aircraft were claimed shot down at the expense of 154 Allied aircraft and 810 men.

During the aerodrome's construction, a series of buildings were erected in the village near the church as quarters for the Women's Auxiliary Air Force (WAAF) but instead became the sergeant's mess for the Americans. In more recent times these buildings, known locally as "the camps," fell into rack and ruin and so were demolished to make way for a new housing development. Today Philips Medows, Stanbrook Way and Forge Gardens stand on these sites. 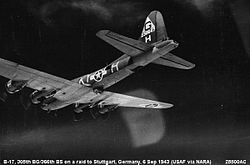 Boeing B-17F-115-BO Flying Fortress Serial 42-30647 of the US Army Air Forces 366th Bombardment Squadron on a mission to Stuttgart, Germany, on 6 September 1943. On 23 September 1943, this aircraft crashed at Chevelston returning from a mission, killing all on board

On 24 March 1944[1] a Boeing B-17G Flying Fortress bomber belonging to the US Army Air Force's 422nd Bomb Squadron, 305th Bomb Group (Heavy), crashed on take off from RAF Chelveston, killing the entire crew of 10 and 11 persons on the ground. Today Forge Gardens stands on the crash site.[2] In May 2009 a service was held in the village church and a tablet recording the names of those who died in the crash was dedicated. Two children, Keith (aged 14) and Monica (aged 4), were killed during the crash when the aircraft hit the house they were sleeping in. The remainder of those who died consisted of servicemen who were sleeping in a barrack block which the aircraft hit and the crew of the bomber. It is said that at certain times of the year the distant drone of a B-17 can be heard in the early dawn hours, and there are also various sightings of ghostly airmen seen around the church yard and near to the crash site.

In common with most other place, the village name has evolved over the centuries. The earliest recorded version was 'Giveldene' in 1086 and since then there have been over 20 changes. At one stage (circa 1390) it was recorded as being 'Yelden' before becoming known as Yeveldene in 1461. Other names include Chivelden, Gyueldene, Yueldene, Yealdon, Evelden, Yeveldene, Yielding and Yeilden. Finally it was recorded as being 'Yelden' again in 1830 with the latest variant 'Yelden' having arrived in more recent times.

Depending on which direction you approach from you will find that the name of the village is spelt differently on various sign posts:

Yelden is famed for its Strawberry Fayre which is held on the last Sunday in June each year. This generally attracts thousands of visitors to the village to sample oysters and champagne, strawberry teas, live jazz, classic cars, bikes and tractors and traditional summer fete activities to raise funds for the Church.