Writtle is a village and parish in the Chelmsford hundred of Essex, lying a mile west of Chelmsford itself. It has a traditional village green complete with duck pond and a Norman church and was once described as 'one of the loveliest villages in England, with a ravishing variety of ancient cottages'.[2] The village is now home to Writtle College, one of the UK's oldest and largest land-based colleges and a partner institution of the University of Essex, the grounds of which once housed a Royal hunting lodge, later the possession of the De Brus and De Bohun families.

The suggestion that Writtle is the birthplace of Robert the Bruce, as well as his father Robert de Brus, 6th Lord of Annandale, is contested though its possession and use by both is incontrovertible. Today Writtle hosts the annual southern V Festival within the grounds of Comyn's Hylands Park. At the 2001 census, it had a population of 5,632,[3] decreasing to 5,383 at the 2011 Census.[1]

The Romans were present in Writtle[4] shortly after the Roman conquest by Claudius, but the presence of a metalled road,[5] numerous archaeological finds and the ease with which the river can be forded in Writtle are still not significant enough evidence to suggest that Writtle, rather than Chelmsford, was the site of the Roman town of Caesaromagus, as suggested by the Essex historian Morant (et al.).[6]

Named in the Little Domesday Book, as a Royal demesne (manor) of 194 households, the village boasts the site of one of King John's hunting lodges,[7] sited within the grounds of the present HE institution Writtle College (circa 1210).

The estate and village were later a possession of Isabel de Brus (Bruce), via a grant of Henry III[8] and a known residence of her grandson Robert, father to the future king.[9][10] For a time thereafter it was leased to a Francis and Joan Bache, but the estate was taken by Isabel's great-grandson, Robert The Bruce, King of Scots, in the 1320s.[11][12] It was in Writtle in 1302 that Robert had married his second wife, Elizabeth de Burgh; there is some evidence to suggest he was also born in the village rather than in Turnberry Castle, but the story is possibly conflated with that of his father of the same name.

Another well known historic figure who lived in Writtle was Sir John Petre (1549–1613).[13] He sat as a member of parliament for Essex from 1584 to 1587 and also served as Lord Lieutenant of Essex. In 1603 he was raised to the peerage as Baron John Petre, the first baron of Writtle. Baron Petre publicly acknowledged that he was a Roman Catholic and refused to follow the Church of England during the time of Queen Elizabeth I and King James I. He died in October 1613, aged 63, and was succeeded in the barony by his son William,[13] who later married Katherine Somerset. One person from Writtle who did help to bring about the English Reformation was Dr. John Bastwick (1593–1654), a religious zealot who opposed Roman Catholic ceremonial in the years before the outbreak of the English Civil War.[14]

In August 1914 the 4th Battalion of the Oxfordshire and Buckinghamshire Light Infantry Regiment arrived in Writtle. The 4th Ox and Bucks Bn was part of the Territorial Force, or volunteer reserve, of the British Army. While in Writtle the men underwent physical and military training. On 14 October 1914 they paraded in the grounds of Hylands House in the presence of King George V. The Ox and Bucks left Writtle in April 1915.[15]

According to a contemporary newspaper report Writtle was hit by a V-2 rocket on Friday 12 January 1945. The V-2 fell about 200 yards south of the River Wid bridge in a field belonging to Skeggs Farm. The impact crater was 30 feet across by 20 feet deep. 19 properties were extensively damaged and a further 218 slightly damaged including All Saints' Church. Fortunately no casualties were reported although two families in Bridge street were made homeless.[16]

Writtle holds a distinguished place in the history of radio broadcasting. In the early 1920s it was the site of the experimental Marconi station 2MT ("Two Emma Toc"), from where Captain Peter Eckersley made the name of the village famous with his station announcement "this is Two Emma Toc, Writtle testing, Writtle testing".

The prefabricated hut from which the broadcast was made (constructed for use during the First World War, but never shipped to the war zone) was later relocated to King's Road primary school in Chelmsford, and has now been re-erected with replica equipment at the Sandford Mill museum, near Sandon. The Writtle transmission station was also the last independent outside the BBC, suspending transmission in January 1923. Independent radio did not re-emerge in the UK till the 1960s. 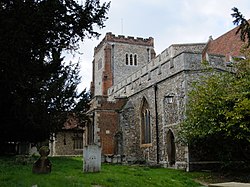 The Domesday Book mentioning a church and priest in Writtle suggests that Christian worship in the village pre-dated the Norman Conquest;[4] the early-13th-century nave and chancel seem to be extensions of an 11th-century construction, which itself replaced a Saxon church.

During the mediaeval period, the church "changed hands" several times, revenues being received by the Prior of Bermondsey in the 12th century, and then by the Hospital of the Holy Ghost in Rome from the early 13th; the turbulent reign of Richard II saw the church being seized by the king, eventually coming under the control of William of Wykeham's New College, Oxford in 1399.[17]

Longmeads House is a large Victorian building with grounds, and an important feature of the village. It was built by Robert Woodhouse in the 1880s and remained in the family until it was acquired by the Seabrooke family in 1930. The estate was acquired by Essex Council in 1950 and is now the village's community centre.[18]