Witcham is a small village in the very centre of Cambridgeshire, in the fenland near Ely.

The village is surrounded by fenland farms and has a village hall and a 13th-century church dedicated to St Martin. It has a pub called the White Horse and a fine village green.

The name of the village derives the wych elms which used to grow here in significant numbers.

Witcham is built around a cross-roads in the centre of the village with each of the four roads having housing on each side for 50-200m. The north-bound street is called "Martins Lane", the east-bound street is "High Street", south-bound is "The Slade", and west-bound is "Silver Street", which leads to the more recent housing developments of "Westway Place" and "The Orchards".

The village hosts the World Pea Shooting Championships on the second Saturday in July every year and has staged the competition annually since 1971.

A Roman cavalry helmet of the 1st century AD was found in the village gravel pit, and now resides in the British Museum.[1] 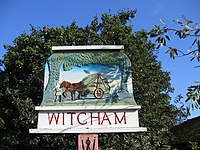