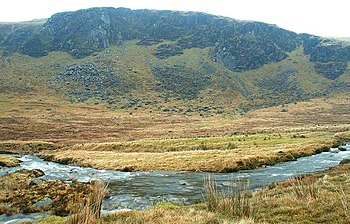 The White Water River is a mountain river in County Down, flowing through the Mourne Mountains and down to the sea in Carlingford Lough near Greencastle, County Down. The river lives up to its name: in the high Mournes it is a streak of white as it tumbles over its rocky course.

There is a scenic driving route through the Mournes named "The Whitewater Loop" which in part follows the river.

The White Water River has been declared an "area of special scientific interest" because of the physical features of the river and its associated riverine flora and fauna.

The White Water rises south of the Spelga Dam Reservoir, just yards from the source of the River Bann which flows in the opposite direction. The initial course of the river is between Pigeon Rock Mountain and Slieve Muck, running due south, and its valley is followed by the B27 Hilltown to Kilkeel road.

Out of the mountains, the Whitewater continues south, broadening as it receives streams from the slopes of Eagle Mountain, past Attical and Knockchree.

In its mid reach, the White Water flows through the estate woodland of Mourne Park, its stream a mixture of riffle, glide, pool and run where the channel has been modified by fishing weirs, and chute, rapid and riffle along the more natural and unmodified reaches.

Downstream of Mourne Park the river is characterised by a riffle and run sequences and a few deep pools.

North of Cranfield the river performs a loop to westward and enters the lower end of Carlingford Lough in a broad, tidal bay north of Greencastle.

The river is rich in wildlife. Otters are frequent.

Its gravel-based rapids in the upper reaches provide spawning ground for salmon, brown trout and sea trout. The deeper, lower river has flounder and bass.