From Wikishire
(Redirected from Waylands Smithy)
Jump to: navigation, search 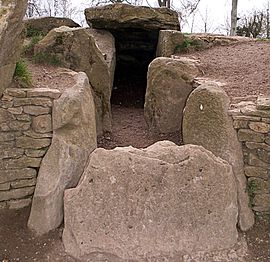 Wayland's Smithy is a famous Stone Age monument on the Berkshire Downs, found near the White Horse of Uffington and Uffington Castle. It is very near to The Ridgeway, an ancient road running along the Berkshire Downs, and is now known to be Neolithic long barrow and chamber, though for centuries it has gathered legends of its own, and the name of the Anglo-Saxon smith-god, Wayland.

The site is in Berkshire, above Ashbury.

Wayland's Smithy is one of many prehistoric sites associated with Wayland the Smith or Wolund, a Germanic smith-god. The name was seemingly applied to the site by the Saxons who settled in the area some four thousand years after Wayland's Smithy was built. The first documented use of the name was in 955 AD, in a charter of King Edred.[1]

According to legend, a traveller whose horse has lost a shoe can leave the animal and a silver coin on the capstone at Wayland's Smithy. When he returns next morning he will find that his horse has been re-shod and the money gone. It is conjectured that the invisible smith may have been linked to this site for many centuries before the Saxons recognized him as Wayland. The Ancient Britons may have been accustomed to making votive offerings to a local god.

In recent years, at this and other ancient sites, such as the West Kennet Long Barrow, some visitors have left objects, including horseshoes, flowers, nuts, grain, fruit, and feathers.

Rudyard Kipling, in his interlinked collection of stories Puck of Pook's Hill, set many of the stories near the Smithy, and told of the arrival of the smith god in the first.

Author Patricia Kennealy-Morrison has a protagonist named Turk Wayland in her Rennie Stride mystery series, and sets a scene at the end of the fourth book, A Hard Slay's Night: Murder at the Royal Albert Hall, at Wayland's Smithy.

Julian Cope included a song called "Wayland's Smithy Has Wings" on his 1992 album The Skellington Chronicles.

In the US sitcom The Simpsons, Smithers' first name is Waylon. This is believed to be a reference to Wayland's Smithy.

The Ridgeway and Uffington Castle

The site was created as a stone tomb, then encased in a mound 185 feet long and 43 feet wide at the south end. Its present appearance is the result of restoration following excavations undertaken by Stuart Piggott and Richard Atkinson in 1962–63. They demonstrated that the site had been built in two different phases, a timber-chambered oval barrow built around 3590 and 3550 BC and a later stone-chambered long barrow in around 3460 to 3400 BC.[2]

The wooden mortuary house mainly consisted of a paved stone floor with two large posts at either end. A single crouched burial had been placed at one end and the mostly disarticulated remains of a further 14 individuals were scattered in front of it. Analysis of these remains indicated that they had been subjected to excarnation before burial and deposited in possibly four different phases. Postholes at one end have been interpreted as supporting a timber facade. The whole monument was covered by an earthen barrow with material excavated from two flanking ditches and measured around 65 feet in length.[2]

The later stone tomb consists of two opposing transept chambers and terminal chamber; along with the longer entrance chamber, this gives the burial area a cruciform appearance in plan. At the entrance four large sarsen stones stand (originally six, but two are lost), having been returned to their upright locations following the 1962 excavations.[3] It is classified by archaeologists as one of the Severn-Cotswold tombs. The large trapezoidal earthen barrow erected over it was revetted with a stone kerb and its material was again excavated from two large flanking ditches. Excavation in 1919 revealed the jumbled remains of seven adults and one child.[4]

The site is important as it illustrates a transition from a timber-chambered barrow to stone-chamber tomb over a period that may have been as short as 50 years. Carbon dating of the burials in the second tomb suggest it was a late use of this style of burial, being similar to West Kennet Long Barrow, which had been in use 200 years before.[4]