From Wikishire
(Redirected from Wall, Staffordshire)
Jump to: navigation, search

Wall or in full Wall-by-Lichfield is a small village in Staffordshire, just south of Lichfield. It stands on the site of the Roman settlement of Letocetum, on the ancient Roman road known as Watling Street, now overlaid by the A5.

The nearby junction of the A5 and A5127 roads and the M6 Toll motorway is often referred to as 'Wall junction'.

The parish includes the small villages of Pipehill, Hilton, Chesterfield and the tiny hamlet of Aldershawe, which is about half a mile north of Wall. 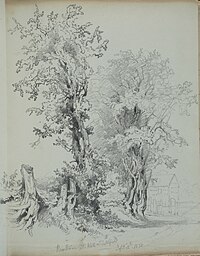 Hawthorn trees at Wall, sketched in 1838

The first detailed evidence of human settlement comes in the 1st century. A Roman fort named Etocetum (reflecting an indigenous name reconstructed as *Lētocaiton or "Greywood") was established at Wall in or soon after AD 50 to accommodate Legio XIV, then advancing towards the northwest. A fort was certainly built in the upper area of the village near to the present church in 50s or 60s and Watling Street was constructed to the south in the 70s. A bath house and mansio was built on the lower ground south west of the fort in the late 1st century for use by its soldiers. It was later used by the inhabitants of a civilian settlement which grew up around Watling Street. In the 2nd century the settlement covered approximately 30 acres west of the later Wall Lane. By the 1st or 2nd century there was a burial area beyond the western end of the town. The town was mentioned in the Antonine Itinerary.

In the late 3rd or early 4th century the eastern part of the town, of approximately 6 acres, between the present Wall Lane and Green Lane and straddling Watling Street, was enclosed with a stone wall surrounded by an earthen rampart and ditches. Civilians continued to live inside the settlement and on its outskirts in the late 4th century. The settlement appears to have declined rapidly soon after the Romans left Britain in around 410 and the focus of settlement shifted to Lichfield.

Despite this shift of population, this community has been identified by some historians as the Cair Luit Coyd which Nennius lists among the 28 cities of Britain in his Historia Brittonum,[1] The name ‘’Cair Luit Coyd’’ has also been identified with Lincoln or Lichfield. The name means ‘Grey Fort of the Woods’.

The fate of the island

John Morris in 'The Age of Arthur' gives Wall-by-Lichfield a central place in the history of Dark Age Britain, noting that, according to archaeological finds, the boundary between the English of Mercia and the Britons of Powys fell around Lichfield until the mid-seventh century. A poem by Llywarch Hen pays tribute to Cynddylan of Powys and records that "Before Caer Luitcoed they triumphed; There was blood beneath the raven and fierce attack; They shattered shields, the sons of Cyndrwyn".

The clash at Caer Luitcoed was the last throw of Welsh power in the lowlands though: that very generation the Mercians swept westwards to the edge of the mountains – as the poet recalls "Gone are my brethren from the lands of the Severn, Around the banks of Dwyryw".[2]

It is left to the imagination whether this tiny village once gave its name to a wider region of Luitcoed, with a remarkable similarity to the Welsh name now given to all the lands to the east: Lloegr.

Development of Wall since the Romans has been slow, and it has never developed beyond a small village. The earliest mediæval settlement may have been on the higher ground around Wall. Wall House on Green Lane, although dating from the 18th century, is probably on the site of the mediæval manor house. Wall Hall to the south also dates from the mid 18th century but replaced a house which existed in the 17th century. By the late 18th century several dwellings were built on Watling Street west of Manor Farm and formed the lower part of the village.

In 1837 the church was built, which in 1843 was consecrated as the Parish Church of St John. The church's architects were Moffat and Scott, Scott later became the internationally renowned architect Sir Gilbert Scott. The Trooper Inn existed by 1851.

In the 1950s ten council houses were built on a road called The Butts. The re-routing of the A5 around Wall, as the Wall By-pass in 1965, relieved the village of traffic, re-establishing its quiet nature.