Truskmore is a mountain of 2,123 feet spreading across the border of County Sligo and County Leitrim. It is the highest peak of the Dartry Mountains and provides the highest point in both counties. The very summit, at 2,123 feet, is exclusively in County Sligo and is that county's county top. The summit is just a short distance from the border though. The mountain has a subsidiary peak, the Southeast Cairn, which is the county top of County Leitrim

The name in Irish is Trosc Mór, meaning "Big Cod", or leastwise "Big something", and there is no firm agreement on the origin.

Truskmore is the highest point on a large plateau stretching across northeast Sligo and northwest Leitrim. The edges of this plateau is marked by high cliffs; these include Benbulbin (1,726 feet), Benwiskin (1,686 feet), Slievemore (1,959 feet) and King's Mountain (1,516 feet).[1]

A television transmitter stands at the main summit.

The simplest climb is up the access road to the mast, from Gleniff. Other routes are available.[1]

Truskmore Cairn (or in fact Truskmore Southeast Cairn) is a subsidiary peak to the southwest of the main summit and which lies in County Leitrim, providing that county's highest point, at 2,070 feet, at grid reference [ G759473] 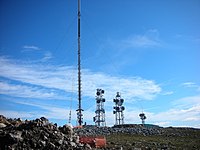