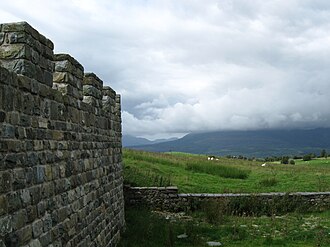 Tomen y Mur is a Roman fort complex in Merionethshire (SH705386). The fort was constructed under governor Gnaeus Julius Agricola in AD 78, and was abandoned around AD 140. A millennium later, in the Norman period, the site was reoccupied and refortified with a motte within the old walls. It is a scheduled monument in the care of Snowdonia National Park Authority.

Tomen y Mur stands on the slope of an isolated spur above the A470, northeast of Trawsfynydd Lake. It is one of the most exposed and isolated Roman sites in Wales.

According to Tacitus, the Ordovices tribe of the Cambrian Mountains were particularly reluctant to submit to Roman occupation and, alongside the Silures to their south they had fought a bitter guerrilla war under the leadership of Caratacus during the AD 50s. Shortly before Agricola's governorship began in AD 78, the Ordovices were still actively resisting and had massacred an entire regiment of Roman cavalry based in their territory. Agricola's response, part of his overall conquest of the western mountains, was so brutal that Tacitus tells us that the Ordivices were effectively wiped out.

The fort's purpose was to maintain order amongst the remnants of these local peoples and protect road communications in what was, at least initially, a dangerous and lawless area for the Romans. The timber fort founded by Agricola probably housed a cavalry unit of 1000. It was subsequently reduced in size and rebuilt in stone in order to accommodate 500 infantry in the early 2nd century. This rebuilding work suggests that the military situation was stabilising and that the legionaries had settled down into a garrison role, so much so that roughly 30 years later the fort was abandoned. No references to the site have survived from antiquity and today we do not even know its Roman name.

Despite this the remains are extensive, with many ancillary features being traceable as eathworks outside the fort: a parade ground, bath house, mansio (Inn), roads, burial mounds, a possible temple and a small military amphitheatre (Ludus) - a rare feature in Britain. It has been speculated that the arena was built to compensate the legionaries for such a bleak posting, but it is also possible that the fort's very isolation allowed its preservation; many auxiliary forts having had their own arenas erased by ploughing, etc.

Inscribed stones, found at Harlech Castle and believed to be from Tomen y Mur, document the rebuilding of the fort in stone. Each stone commemorates, in paces, various lengths of completed fortress wall and the units (Centuria) who built them. Some of these 'Centurial Stones' are on display at the Segontium museum, Caernarfon. A section of the 2nd century curtain wall has recently been reconstructed to give an impression of how the defences may once have looked.

The site is an important one in Welsh mythology; it is the legendary palace of Ardudwy (Mur-y-Castell) in the fourth branch of the Mabinogi. Dominating the site today is a Norman era motte. Little is known about the fortification, but it is possible that it was constructed by William Rufus to counter the Welsh insurgency of 1095. The name Tomen y Mur refers to this feature; translated, it means "Mound in the walls".