Thurlaston is a village in Leicestershire, just over six miles west of the City of Leicester. The 2011 census gave the population of Thurlaston and Frolesworth together as 807.

In 1872 Thurlaston was described as:

The history of Thurlaston extends back as far as the Anglo-Saxon era. It appears as "Turchilestone" in the Domesday Book of 1086, which records that the manor was held by the Sheriff of Leicester, Robert de Bucy from Hugh de Grandmesnil.[2]

In 1270 the manor is recorded as owned by Robert de Champaine, who controlled the land under the pretence of a Knight's fee allocated to him by the King.[3]

The earliest census data regarding industries and professions in Thurlaston is 1831, with agriculture being the chief industry with 53% of occupants being involved; with handcraft and manufacturing making up the remainder. However as of 1881 a more detailed classification of resident occupation was carried out, revealing 90% of industry being directly related to agriculture, with an entirely male workforce. The only recorded work of women at the time was classed as "Domestic Services".[4] Industry in the present day has declined significantly in the agricultural area, with just 4% of the working population being involved. The prominent occupations now are the repair and trade of motor vehicles, and the manufacturing industry, which over a quarter of the entire working population is involved in.[5]

Census data extends Thurlaston's population history back to 1881, with a population of 533. The population remained stable with little fluctuation until a decline to 378 during the 1961 census, however following this a steady growth saw the total rise to today's figure of 807, the highest figure so far recorded.

Thurlaston has a close knit community, collectively involved in such events as the Thurlaston Carnival, along with events ran in the village hall.

Since the 1881 census on local industries there have been large changes in occupation of residents. Agriculture is no longer the primary industry, with just 18 residents out of the 430 who are aged 16 - 74 and in work. Manufacturing has become the primary industry with 100 people being involved in a type of manufacturing in food, textiles or technology. Overall the employment data has moved with the times, with primary work becoming less prominent within communities, and the prominence of secondary and tertiary industries increasing. 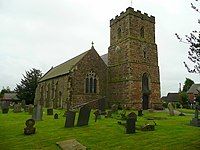 The Church of All Saints is the parish church, and Thurlaston's only listed building.[6] Extensive restoration was carried out in the 1840s, mainly repairing the slate roof and renewing the Chancel Arch.

Thurlaston Village Hall is the village and parish hall. It is a traditional 1920's village hall, with the most significant refurbishments coming in the twenty-first century.[7] It hosts a variety of functions, events and meetings.

Thurlaston Annual Carnival has been running yearly since 1971, it features music and entertainment with varying themes each year. As of 1984 it became the "Thurlaston Craft Fair and Carnival".[8]