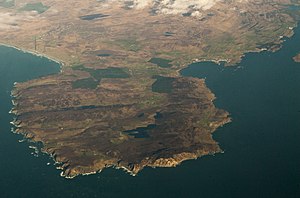 The Oa from the air 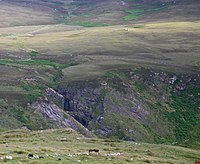 Waterfall at the Mull of Oa

The Oa is a rocky, bulbous headland in the south-west of Islay, in Argyllshire. Its name is from the Gaelic An Obha. The whole of the Oa is an RSPB nature reserve.

The area is almost an island; its high point is Beinn Mhòr, rising to 663 feet, in the south. It used to be inhabited, but no longer: in 1830 the parish became deserted due to the Highland Clearances.

In 1918, two ships were lost off Islay, the SS Tuscania, a passenger liner, and HMS Otranto.[1] </ref> The American Monument was erected on the south coast by the American Red Cross to commemorate them.

The area around the memorial is a Nature Reserve owned by the Royal Society for the Protection of Birds,[2] where chough, golden eagles, corn crakes and sea birds can be seen. 4,772 acres have been designated as a Special Protection Area for the protection of the chough.[1] Ireland]] can be seen from the south peninsula on a clear day.[3]