From Wikishire
(Redirected from The Hermitage)
Jump to: navigation, search

The Hermitage, by Dunkeld, is a site in Perthshire, owned by the National Trust for Scotland.

The full name of the place is The Hermitage pleasure ground. It is found on the banks of the River Braan in Craigvinean Forest (just to the west of the A9).

Two glorious Georgian follies peep out of the forest; Ossian's Hall of Mirrors and Ossian's Cave, built by the Dukes of Atholl, who had their former main residence in nearby Dunkeld House (demolished in the early 19th century). They were built to honour the blind bard Ossian of myth.[1] 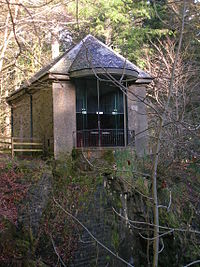 The Hermit's Cave was built around 1760 for the third Earl of Breadalbane, who unsuccessfully advertised for a permanent eremite. The guide in 1869, Donald Anderson, dressed up with a long beard of lichens and clothes of animal skins.[2]

Also in its grounds are several Douglas-fir trees — one of which was the first tree in Britain to reach 200 feet in height. The Forestry Commission Scotland, on the other hand, gives its height as 194 feet.[3] 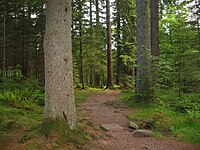 A stretch of the riverside path

Visitors to the site can undertake various walks. The most popular walk is the walk of three-quarters of a mile to Ossian's Hall. Wheelchairs are accommodated by a pass-for-all route. There is also a link to a thirty-mile network of footpaths beyond The Hermitage to various parts of Dunkeld, which paths date back to the 18th century.

Originally, the popular riverside path purposely deviated away from the river at about a half-mile from the car park. This was to build up the visitors' anticipation for the waterfall (the Black Linn Falls) that is to be found a short distance ahead. Another path, running parallel to the riverside path, is wider, the purpose for which, it is believed, was to accommodate horse and carriages. A stone bridge, dating from 1770, is located nearby. Standing next to it, and appearing to be growing out of it, is a Cedar of Lebanon, which is believed to be the oldest tree at The Hermitage.