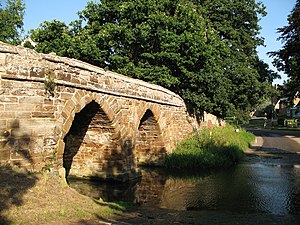 Sutton is a village and parish in Bedfordshire, just over a mile south of Potton and near the market towns of Sandy and Biggleswade. At the 2001 Census, its population was 299.

The first written record of the village is its listing in the Domesday Book. Sutton Castle was built c1220, though now an oval motte is all that remains. Unusually, the castle is a long way from the village and church.

John of Gaunt, 1st Duke of Lancaster,[2][3] son of King Edward III, held the manor of Sutton in the 14th century. A moat near the John O'Gaunt Golf Club, in Sutton Park, is said to be the site of his manor house. The present house is modern,[4] but to the north of it is a large earthen mound, said to be the site of the original house, and undoubtedly of early date.[5] It has been encircled by a ditch, and local tradition has it that the village was formerly near to it.

Sutton was the birthplace of General John Burgoyne the British army officer, politician and dramatist best known for his role in the American War of Independence. He lived with his family at Sutton Park (now the John O'Gaunt Golf Club). In 1741, the Sutton Enclosure Act[6] was passed. Such local Enclosure Acts allowed the major landowners in the area to reorganise their widely separated landholdings. This produced a larger estate for the Burgoynes. Sutton Park House was destroyed by a fire in 1825. It was subsequently re-designed in 1876. There are monuments to the Burgoynes in All Saints Church. The tomb of Sir John Burgoyne, by Edward Stanton, is dated 1604. The monument to Sir Roger, who died in 1679, is by Grinling Gibbons [7]

The village pub, the John O'Gaunt Public House, was licensed in 1835 and created in 1836.[3] The pub was created from three 18th-century thatched cottages.

The village school, Sutton V.A. Lower School, was opened in 1870.

The Packhorse bridge is a small, double arch bridge[8][9] beside the ford across Potton Brook, a tributary of the River Ivel.[8] The bridge was built in the 14th or 15th century from local sandstone. It is thought to be the only surviving bridge of its type in Bedfordshire.[8] The bridge was situated on an important trade route involving wool between the towns of Bedford and Dunstable.[8]

In 1941 Bedfordshire Council assumed responsibility for the Packhorse bridge, and carried out repairs in 1986. The repairs later earned the council a Civic Trust award in 1988.[10]

The Church of England parish church of All Saints has a barrel organ and was once under the control of the scandalous Reverend Edward Drax Free. A detailed study of the architecture was taken in 2003 and can be read at English Church Architecture