Stuntney is a village in East Cambridgeshire, located between Ely and Soham. It is just off the main road going from Newmarket to Ely, the A142.

The village stands on a rise in the ground which would once have been an island in the Great Fen, and the name of the village reflects this; the ending "-ey", found in several villages of the fens, means "island". It is believed that Stuntney if from the Old English for 'Steep Island', though a less favourable interpretation can be put up it; stunt means "foolish", an unlikely word to name a village though. The Domesday Book of 1086 records the village as Stuntenei.

Stuntney's parish church is the Church of the Holy Cross. There was a church here in the Norman period, but it was almost completely rebuilt in 1876 and the previous Norman Church was demolished due to unsafe conditions. The present church was also rebuilt in 1903 for the same reason.

For a small church, it is well provided with stained glass: there are five stained glass windows, three of which were installed by the Cole Ambrose family.

The village was founded in the Anglo-Saxon period, on an island of dry ground surrounded by the marshes of the Great Fen. Once surrounded by water, a Bronze Age causeway connected Stuntney to the great island further north where now stands the cathedral city of Ely. Before the course of the River Great Ouse was straightened by the Bishops of Ely in the 12th century, the Ouse came right up the edge of the island on which the village stands, and docks existed on what is now agricultural land.

The Domesday Book records that the village of Stuntenei was an eel fishing port.[1]

Mediæval remains, including a large stone coffin, have been unearthed near Stuntney.

The region between Devil's Dyke and the line between Littleport and Shippea Hill shows a remarkable amount of archaeological findings of the Stone Age, the Bronze Age and the Iron Age[2]

In 1868 a school was built in Stuntney as the population rose to around 220 (which is similar to the current population); this school was expanded in 1958 and closed in 1983.

Until the late 2000s, shire horses where kept in the village. Traditionally, the horses were used on the land, but when machinery took over in the 1970s, the horses were kept for breeding purposes.[3] 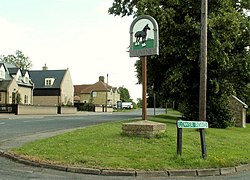 Although the village no longer has a school, a shop or a pub, the Stuntney Social Club is open most evenings and has a licenced bar for the use of members and guests.

The majority of the 60 houses are located across the 3 main roads in the village, however some houses in Quanea and Nornea also belong to the village. Cole Ambrose Ltd, who have been involved in agriculture in the village since the 1600s, are located in Harlocks Farm, Stuntney.[4]