Stocklinch is a village in Somerset, 3½ miles northeast of Ilminster. It was once divided into two manors and two parishes, Stocklinch Ottersey and Stocklinch Magdalen, and so has two churches. The parishes were combined in 1931.

The village is one Somerset's nine Thankful Villages (from a total of just 52 such villages in the United Kingdom). These villages are those to which all the men who served in First World War came home. Stocklinch is indeed Twice Thankful; it is one of only 14 villages in the country which lost no soldiers in either the First nor Second World War.[1] 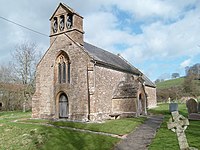 The Church of St Mary Magdalene dates from the 13th century and has been designated by English Heritage as a Grade I listed building,[2]

The Church of St Mary the Virgin, which is of the same vintage, is Grade II* listed.[3]

In 1931 the two parishes they served, Stocklinch Ottersey and Stocklinch Magdalen, were combined into one parish.