Stanway House is a Jacobean manor house, near Stanway, Gloucestershire. The manor was owned by Tewkesbury Abbey for 800 years then for 500 years by the Tracy family and their descendants, the Earls of Wemyss. The then Lord Neidpath, now the 13th Earl of Wemyss, pursued, over a number of years, a restoration programme.

The principal rooms are in a long south-facing range forming an L-shape with the hall, unlike the usual Tudor house plan of a central hall. The northeast wing, remodelled in 1913 by Detmar Blow, was demolished in 1948. The kitchen court was designed by William Burn in 1859. The Gatehouse was built in about 1630. 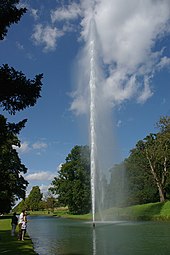 Stanway House is also home to the Stanway Fountain, which was opened on 5 June 2004. The single-jet fountain, which rises to over 300 feet, is the tallest fountain in Britain (its nearest rival being that at Witley Court at 121 feet), and indeed the tallest gravity fountain in the world (of which the next is the Fountain of Fame at La Granja de San Ildefonso at Segovia in Spain (153 feet). In Europe the only taller fountain is the 400-feet high turbine-driven fountain in Lake Geneva.

The fountain has a 2-inch bronze nozzle and is driven from an 100,000-gallon reservoir, 580 feet above the canal in which it is situated. The 12-inch diameter pipe which feeds the fountain is over a mile long.[1]

The estate brewery, an original Elizabethan feature has, with the permission of Lord Neidpath, recently been re-established.[2]

Cutsdean Quarry, which is a nature reserve and designated a 'Key Wildlife Site' in the Cotswolds, is part of the Stanway Estate.[3]

In the Jeeves and Wooster television series, 'Twing Hall' was filmed at Stanway House for the episode "The Purity of the Turf".

Interiors for the 2004 film Vanity Fair were shot there.[4]