St Cleer is a village in eastern Cornwall, on the southeast flank of Bodmin Moor approximately two miles north of Liskeard. 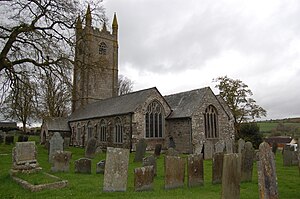 St Cleer parish church is dedicated to St Clarus. Its three-stage tower is 97 feet high and contains a ring of six bells.[1][2]

First built in 800, the church was rebuilt in the 13th century. The tower suffered damage and was repaired in the 15th century.

According to his legend, St Clarus was an Englishman who went to Cornwall to preach to the inhabitants in the 8th century. He founded the church at St Cleer and lived a saintly life nearby. However he rejected the advances of a local chieftainess who had fallen in love with him and when she continued to pester him he fled to France where he lived in an isolated hermitage. The enraged woman had him pursued and then murdered. The place he had lived was afterwards named Saint-Clair-sur-Epte. The saint's feast day is 4 November.[3] 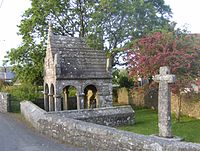 Near the village is Trethevy Quoit, a megalithic chamber tomb. Nearby too is King Doniert's Stone, an inscribed stone of the Anglo-Saxon period.

St Cleer's holy well is found near the churchyard, with a small building covering it, built of granite in the 15th century, to allow for a bowssening pool for total immersion.