Spott is a small village on the eastern fringes of East Lothian, just over two miles south-west of Dunbar. The village straddles an unclassified road leading from the main A1 road.

There is believed to have been settlement in the area for over 1,500 years, and Spott is the site of many finds from the time of the Romans occupation Britain.[1] An Anglo-Saxon homestead is located at nearby Doon Hill.[2] 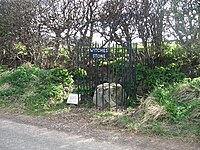 The Witches' Stone, by the roadside near the village

The first Battle of Dunbar in 1296, took place less than a mile from Spott. In 1650, before the second Battle of Dunbar, the Scots army, which vastly outnumbered Oliver Cromwell's army, camped at Doon Hill, just to the east of Spott, before leaving the high ground to meet Cromwell and defeat.[3]

Spott holds the dubious distinction of playing host to the last executions of the Scottish witch-hunts of the 17th and 18th centuries, when several alleged witches were executed at Spott Loan in October 1705.

The origins of the church are somewhat vague, but it is certain there was a church here before the Reformation, when Spott Kirk was a prebendary of the Collegiate Church of Dunbar. Major repairs were carried out on the church in 1790 and again the following century giving its present cruciform shape. One arm of the church is an ancient burial vault.

In 1570 the minister, John Kelloe, hanged his wife in the manse before delivering 'a more than usually eloquent sermon'. He was executed on October 4 at Edinburgh at the Gallow Lee on Leith Walk for the crime.[1]

Spott House has served as home to the proprietors of Spott since the 13th century. Elias de Spott swore fealty to King Edward I of England at Berwick-upon-Tweed in 1296. Over the centuries the estate has changed hands on several occasions and many eminent Haddingtonshire families – the Humes, Douglasses, Murrays and the Hays – have held the lands of Spott.

Spott House was originally a tower house, constructed in 1640, the family home of the Hays of Yester. It is reputed to have housed Oliver Cromwell during the Battle of Dunbar (1650).

In 1830, the house was purchased by James Sprot, who had the house remodelled by William Burn, the pioneer of the Scots Baronial style. The estate remained in the Sprot family until 1947, when it was sold to Sir James Hope. It was eventually sold to the Lawrie family, who sold it to the Danish-born Lars Foghsgaard in 2000.[4]