Southchurch is an ancient parish in Essex that forms a district of Southend-on-Sea. It was an independent civil parish until 1897 and has a documented history dating back to the 9th century. At the 2001 UK census, the Southchurch ward had a population of 9,467. 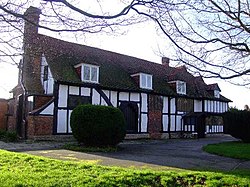 In AD 824, a Saxon thegn, Leofstan presented the manor of Southchurch to the monks of Canterbury.[2][3] It is possible that the church from which the manor takes its name already existed beforehand.[2]

The current local housing stock mainly dates from the first half of the twentieth century, when Southchurch expanded from a village into the residential district of Southend. To the south of the station is Southchurch Hall, a thirteenth-century moated manor house. This is now open to the public as a museum, which stands in a small park: Southchurch Hall Gardens.

Holy Trinity Church is the original parish church of Southchurch. The oldest parts of this church date back to the Saxon era, with later additions in the early 20th century.[2] Christ Church (Church of England) is in Colbert Avenue, just to the east of Southchurch Park East. This parish was carved out of Holy Trinity in 1922. It began as a mission church in Elizabeth Road, which runs from the seafront to Southchurch Park.

Southchurch is served by Southend East railway station. In 2004, following a campaign by residents, traders, and some local councillors, the station signs were amended to read "Southend East for Southchurch Village".

Southchurch Park is the home venue of Southend-on-Sea and EMT Cricket Club.[7]