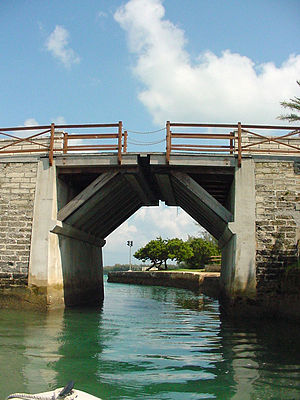 The original Somerset Bridge was built in 1620, and much of its structure remains, though the bridge was largely rebuilt in the mid 20th century. The original bridge was cranked open by hand, but the current bridge is more basic in its technology: it consists of two cantilevered half-spans, separated by an 18-inch gap bridged by a thick timber panel. The entire width of the drawbridge measures 32 inches.[1] The panel is removed whenever a yacht wishes to pass beneath the bridge, allowing the unstayed mast to pass through the gap. A captain must wait for a passer-by to assist in opening the drawbridge.

The bridge is featured on a series of Bermudian dollar banknotes issued from 2009, appearing on the reverse of the pink five dollar note, along with Horseshoe Bay and opposite an Atlantic blue marlin.

Nearby buildings often take their name from the bridge, such as a post office[2] a park and, until October 2008,[3] a sports club.