Slieve na Calliagh is a small series of hills in north-western Meath, the highest of a low range of hills found that part of the county. It rises to a highest point at Carnbane East or Carnbane East Top.

This complex of hills, which go by the collective name of Slieve na Calliagh, have a rich collection of structures from the Neolithic period and onward, and at the top of Carnbane East is a Neolithic burial complex, known as the Loughcrew Megalithic Tomb Cemetery.

The whole is in the townlands of Carnbane and Loughcrew.

The hills of Slieve na Calliagh come with a multitude of names. Slieve na Calliagh is from the Irish language: Sliabh na Caillí means "the Hag's Mountain", and by this name is famed for the ancient monuments upon the hills whose air of mystery has no doubt attracted the name of the supnatural hag Calliagh, a name found in mysterious places across Ireland and the Hebrides.

The of Slieve na Calliagh has become the usual name to denote the main hill, but this hill is specifically Carnbane East.

The archaeological complex spread across the tops of several of these hills has passage tombs with megalithic art on their walls, and this complex is usually known as Loughcrew, the name of one of the townlands and of the parish.

This name Carnbane comes from the Irish An Carn Bán menaing "the white cairn", which may refer to one of the monuments on the hills. 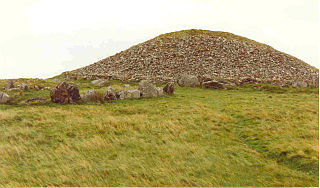 The burial chamber at the summit of Carnbane East

The hills are notable as the location of the Loughcrew Megalithic Tomb Cemetery.