Slade Castle is a tower house in County Wexford, and scheduled as a National Monument.

The castle is located in the village of Slade, near the tip of the Hook Peninsula, a mile north-east of Hook Head Lighthouse.[1]

The original fort was built by the Laffin (Laffan) family in the late 15th century. The fortified two-storied hall was added in the 16th century also adding crenellations. The Laffin estate was quite small, at just 213 acres. This suggests that other sources of revenue, such as fishing or trade, must have funded the castle.

The Laffins lost Slade after the 1641 Rebellion.

The castle was used for storage by the salt works until the 19th century, when it was converted into tenement housing. When the castle was taken over by the Office of Public Works in the 1940s the castle was restored to its old condition.[2][3] 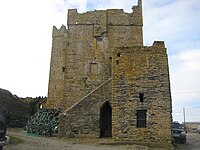 The castle, and its arrowslits

The earliest part of the castle is the four-storey-tall tower. The ground and third floors have vaulted ceilings, with Irish crenelations on the parapet, where there are excellent views of Bannow Bay and Waterford Harbour, important for defence.

The entrance doorway is protected by a machicolation and murder-hole. A fireplace and garderobe survive on the second level. The three ground-floor rooms cannot be entered from the living quarters above and may have been used as warehouses.

The hall is two storeys tall, with entrance protected by a murder-hole. There is a large fireplace at the west end and an oubliette in the south wall. A mural staircase leads to the upper floor.[4][5]