Shirley is a town in Surrey grown into a suburban development contiguous within the metropolitan conurbation. It is a little south of Croydon town centre.

Until the 1930s Shirley consisted of a few hamlets between farms and the estates of large houses. These included Spring Park, Monks Orchard, Shirley Park and Shirley Oaks, names which are reflected in the names of neighbourhoods today.

Monks Orchard is not named after a monastery in the area, but probably commemorates a family named Monk, from Addington, who owned some of the land at one time. When Lewis Lloyd acquired the land and had a mansion built in 1854, he adopted the name of a local wood, "Monks Orchard", for the whole estate.

Lloyd's Monks Orchard House was one of the most substantial mansions in the Croydon area. It had 19 bedrooms, a billiard room, library, and numerous other rooms. The Dining Hall alone was over 36 by 21 feet. The estate covered a huge area, 1,540 acres, stretching northwards from the Wickham Road almost to Elmers End, southwards nearly as far as Addington, and eastwards into West Wickham. It also included several other major residences, such as Spring Park; farms, including Eden Park, Ham Farm, Shirley Farm, Spring Park Farm and Oak Lodge Farm; two dozen or so cottages; The Rising Sun, The Cricketers and the White Hart; and Beckenham Golf Course.

As late as 1923, the area was described in the following way:

The Estate, which has an extensive frontage to the road between the villages of Shirley and West Wickham, is delightfully rural in character, typifying that which is best in the unspoiled English countryside... The land seems adapted by nature for those who are seeking country houses not too far from London, being already park-like meadow land, well timbered, and dotted with coppices; thus affording almost unlimited scope for imagination, and taste, in laying out grounds, by utilising the natural advantages already there.

In the 1930s, a large amount of building took place over much of the open land, largely suburban-style semi-detached houses. To the north, Shirley sprawls into neighbouring areas. However, some land escaped the building boom. Shirley Park House with its extensive grounds became a hotel and in 1965 was bought by the Whitgift Foundation to become Trinity School in a new building constructed on the site. Neighbouring the school grounds is Shirley Park Golf Course. To the south of Shirley are large areas of woodland, including Shirley Hills and Threehalfpenny Wood. Parks and open spaces are dotted across the area, including Miller’s Pond. In Upper Shirley, very large houses in a few exclusive estates have been built, housing ambassadors, etc. 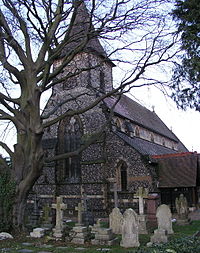 Shrublands is a housing estate in the south-east corner of Shirley, bordered by woodland on three sides. The area now covered by the Shrublands Estate was originally woodland, later occupied by the Addington New Golf Course. The roads are named after shrubs and bushes, such as broom, gorse and jasmine.

After the Second World War, Croydon's severe housing shortage prompted the Council to make a compulsory purchase order on the golf course. The area was soon covered by prefabs, and by 1955 the County Borough of Croydon Council had formulated a plan for the development of the area as a new estate.

To obtain a slightly rural atmosphere it was proposed that the spaces between the houses should as far as possible be communal grass areas. Each house was to have an enclosed back garden.

The estate was to be well provided with children's play areas, and shops, doctors' surgeries, community hall and other amenities were all planned. The estate has remained largely unchanged in almost 50 years.

The village was converted from what was originally a wartime children's orphanage. The original buildings are now converted to flats in addition there are many smart recently built houses. The exclusivity of the area and five acres of open space have made the place popular. Every road in the development is alphabetically named after a flower.

The Village lies encapsulated near the High Street with just two main roads linking to Shirley and Addiscombe. Shirley Oaks Village is home to the only hospital of the town, private healthcare centre Shirley Oaks Hospital.

The tower mill was built by Richard Alwen to replace the first mill on the site, built by his grandfather William Alwen in 1808, after it was burnt by fire in 1854. By 1893, Alfred Rayson, the owner, was forced to abandon the mill as unviable. After closure the mill was allowed to deteriorate, being struck by lightning in 1899 and again in 1906.

In 1951 the mill and land were acquired by the Croydon Corporation. The mill was threatened with demolition when the new John Ruskin School was built but it was protected by its Grade II listed status [1] and strong public interest. The school, now the John Ruskin College, later left the site and housing was built around the mill.

Shirley Windmill is open to the public on the first Sunday of each month.