Saxby is a tiny village in Leicestershire, east of Melton Mowbray. The village of Freeby is to the west, footpaths leading from one to the other, and Garthorpe to the northwest, all three name bearing suffixes from Old Norse. The River Eye runs to the east and the south of the village.

In the midst of the village stands the Church of St Peter, and impressive church built for the village by the 4th Earl of Harborough in 1789, in the classical style. Pesvener wrote that it was 'an attempt at combining the tradition of the Hawksmoor churches of London with Leicestershire usage'.

Saxby is one of the Thankful Villages; one of those few villages in the land to which returned all the men who had gone to the Great War of 1914-1918. Consequently, it has no war memorial from that war. 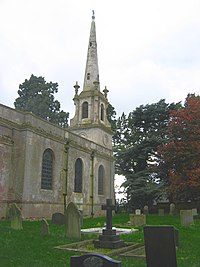