Sandyford is a village of County Dublin, in the conurbation close to Dún Laoghaire. It is found five and a half miles south of Dublin city centre, just south of the M50 motorway. 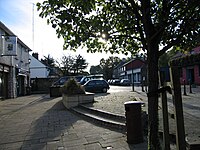 Sandyford Business District, just north of the motorway, makes up much of the suburb and encompasses Sandyford Industrial Estate. It is the location for a number of multinational financial services and technology companies including Google, Facebook, Microsoft and Allied Irish Bank.[1] 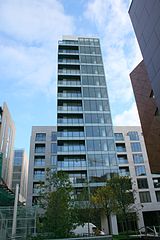 The Sandyford Industrial Estate and surrounding areas is one of the biggest business parks in Ireland, consisting of over 500 companies employing approximately 20,000 people. It was officially opened in June 1967 on a site of 120 acres; 85 acres allocated to light industry and the rest to offices.[2]

A proposal to establish a Sandyford Business District area, to include the core Sandyford Industrial Estate/Business Park as well as the other areas, resulted in the establishment of the Sandyford Business Improvement District Company (SBID) in January 2017.[3] The area has capacity for 17,500 more employees, 350,000 sq m of commercial floor space and 1,000 residential units.[4]

Microsoft have over 1,000 employees in Sandyford, and there is also a substantial workforce at Vodafone's Irish HQ.

In the centre of Sandyford village is a monument to the working men of the village, Pater and Ned.[8]