Rushden is a town in Northamptonshire, close to the town of Higham Ferrers, which is almost contiguous with it. It is in the east of the county close to the borders of Bedfordshire and Huntingdonshire.

Rushden is on the A6 mid-way between Bedford and Kettering, and the southern limits of the town border on Bedfordshire. To its north lies the River Nene. Rushden lies in a small valley, with a stream or brook known as Sidney Brook flowing through the centre of the town. During the late 1990s this stream was culverted to prevent flash flooding. From whichever way Rushden is approached, the streets and roads can be seen stretching out in the valley, with the spire of St Mary's church prominent above its rooftops.

Rushden's growth has resulted from a number of industries, including lacemaking and farming, and especially shoemaking and associated trades. In the mid-1900s there were well over 100 boot and shoe factories in Rushden but today there are only four shoemaking companies left in Rushden[1]

One of the most renowned is Sanders and Sanders, which makes boots for the British Army and several other defence departments throughout the world. Some of the redundant factories have been converted into flats, and MPs support for government help has been limited.[3] Today, as with many towns in England, industry in the town is varied, and mostly situated in an out-of-town industrial estate. As with the industry, town centre shopping in Rushden has changed considerably although there are still many shops. Rushden has the oldest toy shop in the county.[2]

In 1893 a short branch line railway opened linking Rushden and Higham Ferrers with the Midland Main Line. The line was closed in 1959 and dismantled. In 1991 the trackbed was converted into a pocket park.[3] 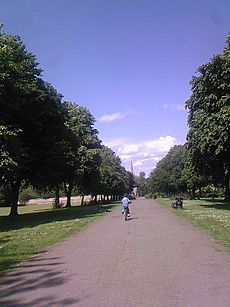 In late 2010 Rushden began to undergo a regeneration project, with the aim to making the town centre a more spacious and attractive place to shop. In early 2011 improvements to the High Street began with regeneration on the ‘southern gateway’ and a creation of a town square in the middle of the High Street.[4]

Also a greenway cycle and foot path was created joining existing footpaths with a new one along the old railway line through the town. This linked Ferrers School to Rushden town centre and then out of Rushden to Crown Park, a small out of town retail/business park with a DIY store and Waitrose Supermarket.

The former Rushden railway station is now owned by the Rushden Historical Transport Society, which operates a museum and real ale bar. The society often holds special events, including an annual 3-day transport cavalcade. The society aims to rebuild the branch line from Higham Ferrers to Wellingborough.

There is also a privately owned museum in Rushden which is situated in the town's Hall Park. It is open between the months of May and October.

Rushden Hall is the oldest domestic building in the town, once owned by many families throughout the years including the Sartoris family and the Pembertons family. The hall now functions as the head office of the town council and some rooms are available for hiring. It lies in 32 acres of land which now is a public park (Hall Park).

Rushden has its own Air Training Corps Squadron, the 858 (Rushden) Squadron. It is run by officers who are commissioned in the Royal Air Force Volunteer Reserve (Training Branch), assisted by adult Senior NCO’s and civilian instructors; all are volunteers. 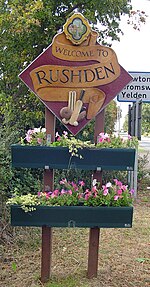