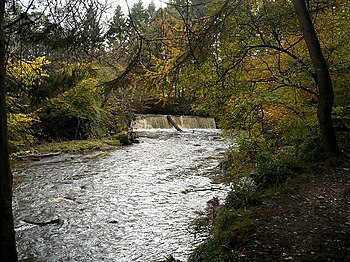 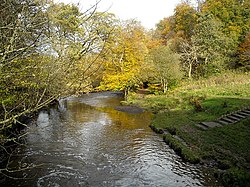 The Rotten Calder below Horseshoe Falls

The Rotten Calder is a river to the east of East Kilbride, Lanarkshire.

The river begins as the Calder Water or 'Park Burn', formed from various burns around Auldhouse which drain from the Eldrig Hills. The burn increases in size around Langlands Moss and more properly becomes the Calder Water. This river has also been titled the 'West' or 'South Calder Water', although the latter title is shared by another river in Motherwell. Upon being joined by the Rotten Burn to the south-east of East Kilbride, the river becomes the Rotten Calder Water.

The Rotten Calder Water runs through a romantic gorge titled Calderglen. Where it flows through East Kilbride Parish, this area of the gorge is under the jurisdiction of Calderglen Country Park, run by the local council. Over 150 nature trails border the river on both banks, in addition to the forest which occupies the slopes. Otters, roe deer and green woodpeckers can be seen by the fortunate visitor to the southern reaches of the park. The river flows by the site of Calderwood Castle (demolished 1947-1951).

The gorge of the Rotten Calder Water was in the past celebrated in countless books and poems for its romantic grandeur and lush ivy-tied crags. Many traces of 18th and 19th century landscape additions can be traced in the park, as well as old mines and quarries. After passing under the General's Bridge at Stoneymeadow, the Water flows by Crossbasket Castle (House) and on through the former estates of Greenhall and Milheugh where the valley is seen to give way to wide flood plains. After Milheugh the river again regains its steep gorge and flows through romantic scenery before flowing into the River Clyde near Bothwell Castle. There are many waterfalls on the river, these are Flatt Linn, Crutherland Linn, Torrance Linn (Fairy Linn or Walk Fort Linn,) Black Linn, Trough Linn, Calderwood Linn, Crossbasket Linn, Horseshoe Falls, Old Horseshoe Falls, Small Falls, and Milheugh Falls

The river flows by the north side of Blantyre before joining the River Clyde opposite Daldowie.

The Valley of the Rotten Calder hides many secrets including hermitages, islets, caves, crannies, ancient markings, fountains, fairy wells, countless waterfalls, over 200 nature trails, summerhouses, ruined castles, steep cliffs and some of the most romantic, rugged and beautiful scenery in the Lowlands.