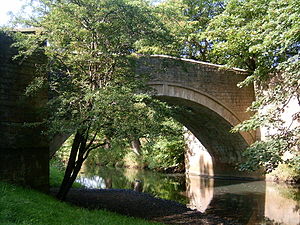 The River Gaunless in the grounds of Auckland Castle

The River Gaunless flows through County Durham until it empties into the River Wear in the midst of that county.

The original of the name of the river is uncertain, but it has been considered to be of Celtic origin, as are many rivers in the county.[1]

The river is formed just south of the village of Copley, by the confluence of Arn Gill (to the south, coming west from south of Langleydale Common) and Hindon Beck (to the north and coming east from Langleydale Common). From this meeting of waters, the Gaunless wends its way east, passing such villages as of Butterknowle, Cockfield and Evenwood and reaching West Auckland. Below West Auckland the river turns north and skirts the south and east of Bishop Auckland, curling around the grounds of Auckland Castle to meet the River Wear.

The Gaunless Viaduct, built in 1825, was the tallest viaduct on the South Durham & Lancashire Union Railway

An extension of the weather station has been placed at the head of the river at Copley Lead Mill to study its unique climate of frost and snow. It lies in a frost hollow and receives no sunshine between October and March because of its geography.

Villages and towns beside the river